Banks getting relief from the market

LIBOR – OIS spread, and indicator of risk premium in the banking system continues to drift down.

A quick refresher:
* LIBOR is an indicator of average rate at which banks say they are lending to each other on a term basis (say for 3 months)
* OIS (overnight index swap) is the market for average of overnight rates over some term (like 3 months)
* In principle OIS and LIBOR should be the same over the same term because borrowing each night for 3 months at a fixed rate should be the same as borrowing once for 3 months. However during the crisis banks stopped lending to each on anything other than the overnight basis, LIBOR spiked (even if banks didn’t lend for 3 months, they would quite a higher rate), while OIS (the projection of the overnight - Fed funds- rate) was dropping (with the expectation of the Fed lowering rates).
* High LIBOR – OIS spread indicates lack of confidence in the system (little willingness to lend term). 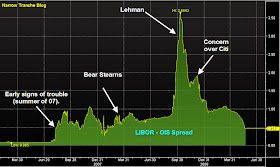 -
-
Many argue that because LIBOR sometimes isn’t a reliable market rate (banks can for example manipulate it), this spread is not as meaningful. That’s possible. But there are other signs that financing for banks is opening up. The 3-day period of May-20th to May-22nd saw smaller banks around the world (particularly in Germany) come into the capital markets with debt issuance. Here are some of the issuers:

One issuance failed: Vietnam Bank for Social Policies (state owned) was unable to place paper (their 4th attempt). Some of the issuance has been government backed. But this diverse mix of banks raising debt capital in a 3-day period is an indication that the confidence in the global banking system has improved significantly, opening capital flows. The question still remains whether this trend is sustainable.
Sober Look