If you think the US banks have a long road to recovery, take a look at Russian banks. The Russian banking system struggling, and more pain is on the way.

March 27 - Hundreds of small Russian banks could go bankrupt because the level of bad loans is likely to hit 15-20 percent by the end of the year, Alfa Bank President Pyotr Aven said.

May 19 - Problem loans could soar to 35-50 percent of total lending in Russia, Ukraine and Kazakhstan, though actual loan losses will be no more than half that level in Russia, Standard & Poor's said.

June 1 - Russian banks may need around 1.3 trillion rubles ($41.51 billion) for recapitalisation in 2009, Moody's said, predicting capital erosion would be the major trigger for rating downgrades.

$41.51 billion may seem like a small number by the US standards, but it's a tough nut to crack for the Russians.

Russia has been hit by the global credit crisis (including a domestic mortgage problem), while relatively low oil prices are causing havoc. A complete luck of foreign investment (given the government’s nasty attitude toward foreign shareholders) doesn't help either. Unlike China and India, the Russians have little going for them in terms of exports outside of the oil and gas and maybe the defense sector. They never truly encouraged small business (either manufacturing or technology). The country is producing at nearly half capacity. 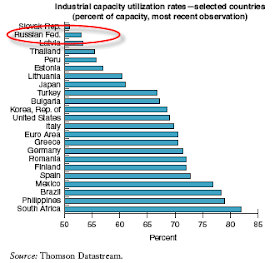 Russia’s economy will probably shrink 6.8 percent this year because the government was slow to launch its anti-crisis plan, the Organization for Economic Cooperation and Development said.

An even more pessimistic assesment came from the World Bank: Forbes::

Russia's economy will shrink by 7.9 percent this year, plunging millions of people into poverty and pushing the unemployment rate to 13 percent, the World Bank said Wednesday.

If oil prices don’t recover significantly, there could be further trouble. The Russian sovereign CDS levels are indicating increased concerns. 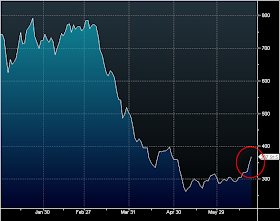