Prices declined 5.6 percent in May from a year earlier and rose 0.9 from April, the Federal Housing Finance Agency in Washington said today. Economists expected a 0.2 percent drop for the month, according to the median of 16 estimates in a Bloomberg survey.

Below is the month-over-month price index from FHFA.

The index has been highly volatile recently, showing a rapid overall depreciation. But one may interpret the recent data as a possible stabilization in prices. Of course this index has been challenged before because it may not be constructed from a fully representative sample.

the index contradicts other popular home-price measures, including the closely watched Standard & Poor’s Case-Shiller index. One possible reason: the FHFA uses the prices of homes backed by mortgages sold or guaranteed by Fannie Mae and Freddie Mac, excluding refinances. That means it’s only looking at homes sold within the conforming loan limits...

This chart from the WSJ shows the comparison to the Case-Shiller index. 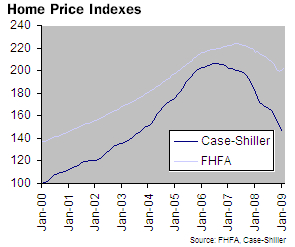 After all even the designer of the index, Robert Shiller wrote in the NYTimes that he does not see housing price recovery for years:

Even if there is a quick end to the recession, the housing market’s poor performance may linger. After the last home price boom, which ended about the time of the 1990-91 recession, home prices did not start moving upward, even incrementally, until 1997.

But what if there is something to this housing price stabilization? Is it possible we are at the bottom of the first dip in the "W" type recovery? An intriguing article was recently written by MIT's William Wheaton, who argues that net new household formation will soon create significant demand by using up existing inventory in the housing market. That demand may be sufficient to stabilize prices and stimulate new construction. It's a matter of demographics.

During the last decade, net new household formation averaged approximately 1.4 million per year. Last year, the Census reported that the US added only 544,000 new households – during severe contractions the young stay at home, singles “double up”, and household formation (normally) slows. Even with declining demographics, however, most analysts foresee new household growth resuming to a level of at least 1 million by 2010 and beyond. If we conservatively add 200,000 demolitions per year, the US economy will “need” at least 1.25 million new units yearly in the near future. With today’s currently depressed construction, this generates a yearly deficit of 750,000 units.

At that rate, the current excess inventory of units for sale or rent will be back below normal by 2011. Prices historically have a strong relationship with sales “duration” – the ratio of inventory-to-sales. Hence under reasonable conditions, in two years we will have to increase construction considerably and prices will have to justify the cost of that construction.