The phases of contraction

The US economy contracted 1% in the last quarter, a third straight contraction. But the recession really started much earlier according to NBER: from CNN (12/1/2008)

The National Bureau of Economic Research said Monday that the U.S. has been in a recession since December 2007, making official what most Americans have already believed about the state of the economy.

If one looks at the components of the GDP however, different sectors of the economy started contracting at very different times. The first component of the GDP to contract was residential housing. That contraction first appeared as early as the beginning of 2006, as the Fed's 13 consecutive rate increases started taking effect. 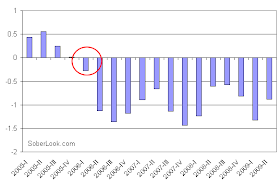 This can be seen also from the private residential construction spending history from the US Census: 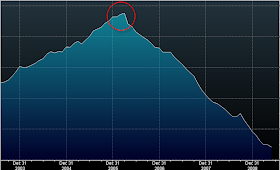 But the consumer bubble continued to expand for some time with all the easy credit that was available. The first real signs of consumer based contraction appeared in early 2008, two years after the residential housing contraction. 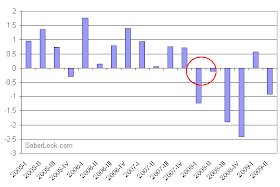 Toward the middle of 08 we started seeing a contraction in non-residential construction spending. The delay was also driven by available credit as well as longer-term projects. 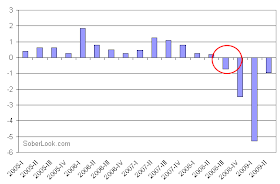 One could argue that any recovery should take place in reverse order, given these components are on a different cycle. First one needs to see a pickup in housing, then the consumer, and finally at a later time, investment in the non-residential fixed assets. Based on this, a precursor to any recovery should be improvement in residential construction. Housing prices may be stabilizing, but so far there are no signs of any improvements in construction spending.