China's "massive offload" of US treasuries is insignificant

The People's Daily (the government sponsored newspaper) published a blurb a couple days ago called "China massively offloads U.S. debt holdings first time in 2009". Readers around the world particularly focused on the word "massively". Given that this publication is censored, there must be a message there. Some in China heralded this as a sign of China's new strength. Is China retaliating for the recent US trade victory in WTO ruling? Some believe it's a form of intimidation - trying to spook the Obama administration into compliance on trade issues.

The following day the paper published another article on the topic entitled "Cut in holdings of US debt may help diversify China's reserves".

Yin Zhongli, a senior researcher with the financial research institution of the Chinese Academy of Social Sciences, believes that the share of US dollar-dominated assets in China's foreign exchange reserves is too large.

"So, we have to diversify our portfolio for risk aversion," Yin said, adding that the country might buy more assets denominated in other foreign currencies, such as the euro, the Japanese yen and the Australian dollar.

One would think in order to diversify reserves, China can simply sell their dollar cash holdings and buy some Yen, Euro, or AUD instead of selling notes. But there is no evidence that China is in a hurry to do much of that. What's really going on?

The reality is that it simply doesn't matter. So they sold some notes and let some bills mature without reinvesting them. This change and even a larger sale by China will have a very modest effect on the treasury market. The chart below shows just how immaterial the "China massively offloads" action really was in the larger scheme of things. The foreign holdings of US Treasuries continues to grow even as China is moderating it's holdings. 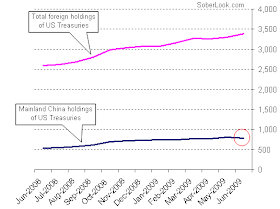 China simply has little choice in the matter. Allocating $2.13 of China's foreign reserves will roughly get them to the same place every time - they have to keep a significant part of it in dollars (currently estimated to be at 70% of the reserves) and they have to hold US debt. The rapidly growing supply of US debt is clearly an issue, but the alternatives for them are no better. Many of the markets that have some depth to them such as UK gilts or JGBs carry as much or more risk than the US government debt.

The significance of this reduction in China's holdings is simply overblown.