It is sometimes sad to see some brilliant thinkers of our time advocate what amounts to be madness. That is exactly what Paul Krugman is pushing for in his latest NY Times OP-ED column

... we would be better off if governments were willing to run even larger deficits over the next year or two. The official White House forecast shows a nation stuck in purgatory for a prolonged period, with high unemployment persisting for years. If that’s at all correct — and I fear that it will be — we should be doing more, not less, to support the economy.

Once a government incurs significant incremental debt, it will never go back to to the levels of indebtedness it had earlier - it's a political impossibility. The debt levels become permanent and even if a government runs a surplus, it is unlikely the politicians will use much of that surplus to bring down debt.

What Mr. Krugman is proposing to the nations of the world is a bet on GDP growth. Go ahead and incur huge additional debt in hopes that the GDP growth will catch up to the new levels of debt, making debt to GDP ratio (the government leverage) tolerable. But that is an absolutely dangerous bet to make and is what got the private sector into trouble. A great example is Japan. They effectively followed Paul Krugman's way of thinking and this is where their debt to GDP ratio is now: 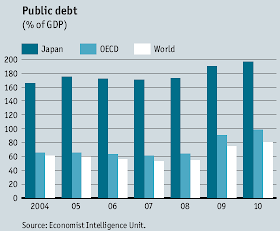 Japan's GDP growth has been lagging their government deficits. Now the government is increasingly concerned about placing paper and is nervously looking for additional buyers. From Bloomberg:


Japan is expanding efforts to attract buyers to the nation’s growing debt load, flooding the backs of taxi cabs for the first time with pamphlets in the hopes of getting retirees to invest more money in bonds.

“Government bonds are worth another look,” the Ministry of Finance says in its latest advertisement, which features a picture of 37-year-old Junko Kubo, a former anchor on Japan’s public broadcaster NHK

Besides the issue of pushing current problems onto the next generation (who may end up with much lower GDP growth), there is a more dangerous precedent being set. It's a form of moral hazard at the national and even international levels, as financially reckless behavior is rewarded. It's OK to leverage up and borrow too much. Let's make more money now, let's buy what we can't afford, let's fight another war that may stretch us to the limit. Let's transfer debt from the private sector to the government the way Japan did. In the end the government can just issue more debt to rescue us.
Here is a good response to Krugman's proposal
Sober Look
‹
›
Home
View web version