Lehman's $130 billion went out with the market

A recent article in Naked Capitalism called "So Where, Exactly, Did Lehman's $130 Billion Go?" again suggests that Alvarez & Marsal have mishandled the Lehman's bankruptcy.

It has come out that the losses appear likely to be $130 billion on what was a roughly $660 billion balance sheet. That is an insanely high level.

The author argues that increased haircuts on Lehman's portfolio do not account for the losses.

Let us make generous assumptions, that Lehman was using 40% structured credits as collateral. And remember, thanks to the 2005 bankruptcy laws, the counterparties can grab collateral. They don't have to go into the bankruptcy queue.

But even with a 20% spike in repo haircuts, we get only to $26 billionish. Even if the Lehman counterparties were jerks and upped the haircuts by 30%, it still only gets you to around $40 billion.

Therefore there must be a conspiracy (or at least some juicy fraud or accounting "irregularities"). That should get people's attention.

It is no surprise that unwinding Lehman has been a mess. Just consider the size and the complexity of the institution. It is also clear that if the filing were more orderly, more funds would have been recovered. But consider the timing of the event.

Increased haircuts and refusal to roll repo financing may have contributed to Lehman running out of liquidity, but it was not the cause of major losses in recovery. The losses have to do with asset valuations and liquidation levels after the collapse. Lehman was concentrated in a couple of asset classes that contributed to these losses. One was exposure to structured product, particularly CMBS. Here is what happened to "AAA" CMBS spreads last year:

Depending on maturity this shock corresponds to some 30% - 50% loss in value. When liquidated in distress, the losses could be higher. 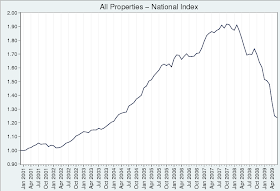 These assets took longer to liquidate/value as the property market continued to deteriorate. Thus on a $660 billion balance sheet, a $130 billion liquidation loss should not seem so strange considering the circumstances - in fact it's surprising it wasn't higher. But of course looking for a conspiracy creates some good hype, and that's what ultimately gets the advertising clicks.