M&A is about to pick up steam

The data says that mergers and acquisitions activity has come to a halt. Here is the latest chart from Thomson Reuters showing M&A activity for the US at a fraction of that for recent years. 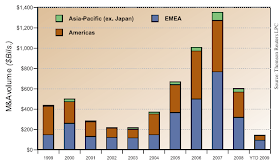 But all that is about to change. M&A will be making a rapid comeback shortly, at least for a short period. Here are some reasons:

1. The equity rally created a more valuable "currency" for stronger companies, who will use their newly appreciated shares to make purchases. Many firms don't believe this rally is going to last and will view the next few months as a window of opportunity.

2. The credit rally provides a relatively inexpensive financing for corporations to fund acquisitions. In particular the rally in the leveraged loan market makes it possible to obtain LIBOR based bank financing that could be appealing to some firms. Some firms view this demand for credit as a window of opportunity as well.

3. As many firms prepare for slow economic growth, cost cutting becomes a priority. Many firms have gutted their staff and cut expenses to the bone. The next step in cost cutting will be consolidation of companies with the goal to use economies of scale and a common infrastructure to wring out additional savings. For some, acquisitions may be the only way to grow.

4. Some firms are trying to refocus and raise cash (to recapitalize or rebuild). That means selling businesses. Here is an example:

General Electric Co. is seeking to sell its security unit, which builds surveillance cameras and alarms, and may fetch about $2 billion, three people with knowledge of the matter said.

GE hired JPMorgan Chase & Co. to find a buyer for most of GE Security, said the people, who declined to be identified because the talks are confidential. Fairfield, Connecticut-based GE asked potential buyers to submit preliminary bids about a month ago, the people said.

We should expect to see more of these types of transactions before year-end.