Paul Volcker is obsessed with protecting banks from "unregulated competition". In his view this competition comes from money market funds who offer a product that competes with bank deposits.

"In my vision of the new financial system, you obviously want to protect banks and have strong banks, and I don't think they should be put at a competitive disadvantage vis-a-vis money-market funds," (from Reuters)

In some ways this proposal is equivalent to suggesting that UPS and FedEx should be regulated (or federally owned) because they present competition to the USPS. Sounds like socialism, doesn't it?

It is not clear just how much competition money market funds actually pose to banks. Money markets are restricted on the average (and maximum) maturity of their assets. As an example let's take a look at SPRXX, the Fidelity's money market fund. It's assets' average maturity is now 74 days and the current yield is 0.33% - annualized. Banks on the other hand don't have significant maturity restrictions and can take advantage of the steep yield curve. If they are lending at 5-6% longer term, they can afford to pay higher rates to depositors.

The chart below compares yield on average bank money market deposit rates (national average) with the yield on the Fidelity money market fund. 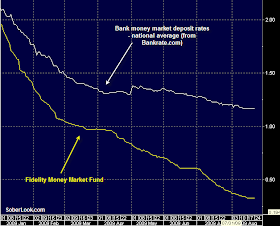 As the yield curve gets steeper the differential gets worse for money market mutual funds. Even bank checking account rates are higher than money fund rates. The table below shows current (national average) rates banks are paying on retail deposits of different types:

An individual who wants a safe place to deposit cash will generally choose an FDIC insured account yielding 1.17% rather than an unsecured account yielding 0.33%. One of the reasons people hold cash with money market funds is to get convenient access to their brokerage or mutual fund accounts (such as Fidelity). Another reason (as is sometimes the case with institutional investors), they just don't trust the stability of banks. Money funds therefore serve an extremely useful purpose. Without a money market product for example cash in a brokerage account would have to be moved into a bank account and back to facilitate securities trading.

In addition, money funds purchase commercial paper that gives corporations (and banks) access to inexpensive short-term financing - some of which translates into better financing and lower costs for consumers.

To the extent money funds present some competition to banks because of the their niche role, it would be counterproductive to eliminate this competition. The approach Mr. Volcker is suggesting is to regulate money funds the way banks are regulated. That means the following:

FDIC insurance will force a fee on money funds, that combined with more stringent maturity restrictions (that are definitely coming), will squeeze the return on funds and their ability to charge fees, making the business completely unprofitable. This will also have a potential to put additional pressure on the FDIC deposit insurance fund. Giving money market funds access to the Fed's emergency liquidity facilities would help the funds, but will put the taxpayer at an increased risk. Requiring money funds to hold capital is an impossibility, because unlike banks, mutual funds can't raise separate equity.

His proposals “would eliminate money funds as we know them,” Paul Schott Stevens, head of the Investment Company Institute ...

Which is exactly how far Mr. Volcker wants to take this in order to help the banks.