If you are paying for a private college in the US, you know how painful it is to write that check (often over $20k) every semester. The chart below shows the maddening pace of tuition growth relative to inflation or even healthcare. CPI becomes meaningless for those who plan to put several kids through private colleges. 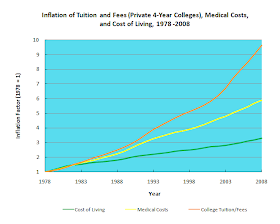 Private college tuition went up again this year by 4.4% (College Board survey) - way above the CPI growth. So these schools must be rolling in cash, right? Apparently not. The number that colleges focus on is the "net tuition" - tuition revenue after scholarships and financial aid. Net tuition has been growing much slower than the "headline" tuition number (as the full payers subsidize those who can't pay) and is now on the decline. This is particularly the case for the less competitive schools in small towns and rural areas.

Moody's: We recently surveyed rated higher education institutions and found that a far larger proportion of private colleges are experiencing price resistance. These institutions tend to have limited financial resources and less ability to withstand a drop in revenues. The risk of rating downgrades is likely to remain elevated for this segment. Our survey focused on net tuition revenue projections for fiscal 2010, generally ending June 2010. Nearly 30% of private college respondents project a decline in total net tuition revenue, compared with just 9% in the prior year.

The good news for those who can pay the full tuition is that private college admissions may become less competitive over time as colleges struggle to improve the "net tuition" revenue. We may also see more "consolidation" (to the extent such a thing is possible) among colleges (such as Barnard and Columbia as well as other schools in the 80s).