The rate on the Fed Liquidity Swap has been changed today to the OIS rate + 50 down from (OIS +100).

The liquidity swap represents the Fed providing dollar funds to the ECB and other central banks while taking euros or other currency as collateral. The all-in rate should be around 60 bp. If the US chartered banks want to borrow from the Fed, they have to pay 75 bp – the so-called Discount Rate. Some have speculated that it makes no sense for the Fed to offer lower rates to foreigners than it would to the US banks and therefore the Fed intends to lower the Discount Rate.

First of all that is unlikely because the Fed clearly stated at the last meeting that they want to raise not lower the discount rate:

Second of all US banks are NOT borrowing from the Fed these days – they have no reason to. In fact they are lending via excess reserves.  The rate that is important is the “Fed Funds Effective Rate”, the rate at which banks lend dollars to each other overnight. And that’s sitting around 8-9 basis points. 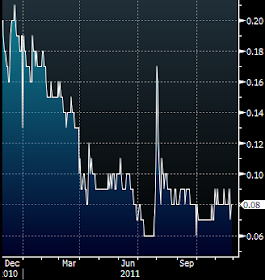 The need for dollars directly from the Fed comes from the European banks (via the ECB) because US banks and US money markets are limiting their lending to them. Thus lowering the Discount Rate simply won’t make any difference.
SoberLook.com
Sober Look
‹
›
Home
View web version