Back in 2009 we discussed the rising leverage of Japan's public sector that seemed unsustainable. Today we find the situation of Japan's debt continuing to deteriorate in the face of increasing concerns about sovereign debt globally. It is a sharp lesson for the US as the dynamics of the two nations' paths are not significantly different.

The gross debt to GDP ratio has risen to 220%  in 2010 (IMF), compared to say Italy at 119% in 2010.   The argument one hears is that Japan is "different".  It supposedly has high savings rate and JGBs are mostly held internally.  But that assumption is about to be challenged.

First of all the high savings rate in Japan is a myth.  Even though the overall private savings rate is high, the bulk of that comes from the corporate sector instead of households.  As corporations de-lever, they are building cash reserves, but households are actually struggling. 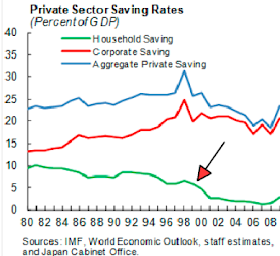 From the G20 report:

Japan's extremely restrictive immigration policy has sharply impacted the nation's demographics, accelerating the aging of the population. That's another lesson for the US - restricting immigration with an aging baby boomer population is a recipe for disaster. The chart below shows projected numbers of the elderly as percentage of the overall population (source: the IMF G20 Report - below).

Increasingly households will be sellers of JGBs (Japanese government bonds) instead of buyers, and the government will have to look elsewhere to finance its bulging budget deficit.  Simultaneously (just as in the US but more rapidly) this aging population is putting Japan's Social Security into the red as expenditures exceed receipts. 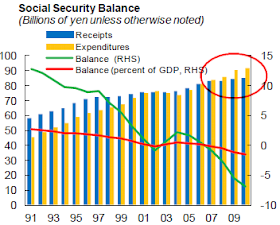 This applies further pressure on the government, escalating debt levels. 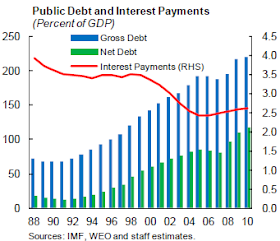 Extremely low rates have kept interest expenses under control (similar to the US), but that's not sustainable in the longer term.


Should JGB yields rise from current levels, Japanese debt could quickly become unsustainable. Recent events in other advanced economies have underscored how quickly market sentiment toward sovereigns with unsustainable fiscal imbalances can shift. In Japan, two scenarios are possible. In one, private demand would pick up, which would lead the BOJ to increase policy rates, in which case the interest rate growth differential may not change much.

As we've seen in Europe, market sentiment can change rapidly - even domestically.


Market concerns about fiscal sustainability could result in a sudden spike in the risk premium on JGBs, without a contemporaneous increase in private demand.

It is entirely possible that in the very near future JGB rates will begin to rise due to increased risk premiums and we may see a steepening of the yield curve. This would exacerbate an already dangerous fiscal situation that is mired by a deflationary spiral that continues to persist.


Reuters: November data for the Tokyo area showed deeper declines that exceeded analysts' forecasts and backed the view that the Bank of Japan will maintain ultra-easy monetary policy for the foreseeable future.

A narrower measure of prices that excludes both food and energy fell from a year ago in a sign that the world's third-largest economy continued to struggle with lackluster job market, weak consumer demand and excess capacity.

The report below (IMF) goes through some ideas on what steps Japan could perhaps be taking to change their course. The US should be watching this situation closely as it closely resembles what Americans will be facing in the near future.