The government's analysis "extrapolated the bubble"

We all do it. We sometimes fully trust analysis provided by the US government, such as the now famous output gap chart below. This version was published by the Washington Post. It shows that the US total output is significantly below "potential" as determined by the Bureau of Economic Analysis (BEA) and the CBO. But determining the economy's potential is no small task and such a claim should not always be taken for granted.

This analysis looks like an extrapolation of the 2000-2007 capacity growth into the current period.  An alternative version of this chart however is provided by Barclays Capital who believes the US economy's output potential has been growing at a slower pace than determined by the BEA. 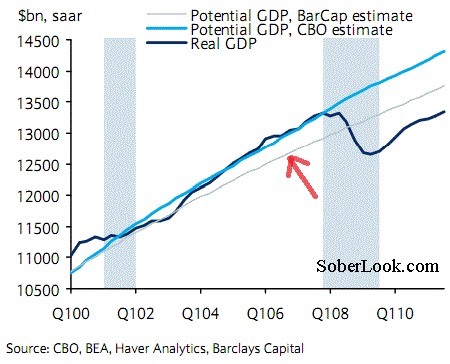 Barclays Capital: ...the CBO estimates that output was at potential during the housing bubble years and that any deviation from the trend established during those years represents an output gap. In contrast, our view is that the housing bubble pushed the economy above its potential; thus, we believe the output gap is much smaller.

In fact if one zooms in on this chart, it starts to make much more sense than the original BEA/CBO analysis that assumed the US was producing at capacity prior to the financial crisis. The Barclays chart shows that economic output between 2004 and 2007 had been growing at a rate above what it is normally capable of. One can only interpret this production level above capacity as simply funded by credit, particularly real estate driven credit.


Now we can see how the US could potentially produce beyond its capacity, creating an unsustainable output growth, effectively a "bubble". And once this is taken into account, the current output gap may not be as dramatic as shown by the government, which, as Barclays Capital puts it, "is extrapolating the bubble".