The "robo-signing" settlement's impact on the mortgage market

Tonight is the State of the Union Address and rumors are circulating that Obama will announce the robo-signing settlement with the big banks. The number thrown around is about $25 billion. The idea is to use these funds to help troubled homeowners avoid default via refinancing and/or principal forgiveness.

To see what this means in the context of the overall mortgage market, let's perform an oversimplified calculation. Let's take someone who is currently paying 5.5% on her 30-year mortgage. Refinancing at current rates and paying 2 points as well as full fees would mean that within 3 years of refinancing the borrower will recover the fees and start saving. That basically implies that anyone with a mortgage rate materially above 5.5% should be refinancing if they can. Again for simplicity, let's take the full universe of FNMA 30-yr Fixed securities and look at the mortgage characteristics of the underlying pools of loans. The chart below shows the amount of loans outstanding vs. the average mortgage coupon (WAC) in the pools. 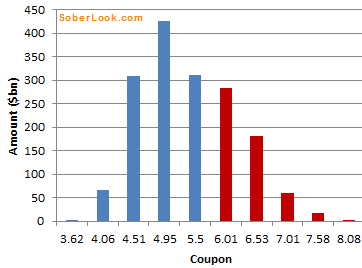 Again this is oversimplified, but the borrowers in the red portion of the chart (higher than our 5.5% example above) should be all refinancing as quickly as possible. The question is, are they refinancing?  The next chart shows the prepayment (refinancing) speed (PSA) over the past month vs. the average coupon. 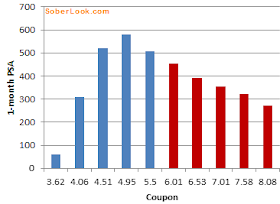 The chart demonstrates that these homeowners are indeed refinancing but at a lower speed than the onses with a smaller coupon.  One would think the trend should be reversed - the higher the coupon the quicker people would want to refinance.  But that's not the case.  In fact fewer high coupon borrowers are able to refinance because those who could, already did.  The remaining homeowners are either really slow or just can't refinance because they have "negative equity" (mortgage principal higher than the value of their homes.).

Much of the refinancing is coming from the lower coupon borrowers, those with newer mortgages (since such low mortgage rates are a recent phenomena.)  The folks on the red part of the chart represent over half a trillion dollars in mortgages. And it doesn't mean that everyone with a 5.5% coupon can refinance either. This exercise just represents the FNMA conforming 30-year mortgages, which is only a part of the overall mortgage universe.

This simplistic calculation tells us just how ineffective the $25bn settlement would be. In fact only about 100,000 borrowers who could be helped with these funds because only some of the funds would go to the homeowners. However there are some 11 million borrowers with negative equity and need help.

So why bother, given this is such a drop in the bucket?  The answer is there may be a couple of potentially positive outcomes, though both are low probability events at this stage.

1. This settlement and the subsequent support for those few homeowners will give the government some idea of how effective partial principal forgiveness and lower rates are in reducing default rates and cutting overall losses for lenders/investors.  Currently this subject is debated. These statistics may pave the way for a much bigger government sponsored refinancing package (although it is not at all clear whether the taxpayer should be supporting such action).

2. The deal may accelerate the foreclosure process that has been put on hold by banks because of the "robo-signing" legal proceedings. Timely foreclosures are key to stabilizing the housing market because they move assets from weaker holders to stronger ones. A couple of million homes in foreclosure could come to the market quicker, reducing the overhang. This may delay the market recovery in terms of prices, but the recovery would be healthier when it does take place.

Many uncertainties in this deal still remain, such as numerous states deciding not to participate in the settlement. States may want to pursue their own litigation that could tie the banks up in court for a long time.  And that would delay foreclosures and make banks even less willing to provide new loans.

Either way, don't forget to tune in at 9 pm EST tonight and listen for the words "robo-signing".