34% chance of ObamaCare to be ruled unconstitutional this year, 50% by end of next year

A US Supreme Court ruling that would make ObamaCare unconstitutional by the end of 2012 is trading at 34% on Intrade. By the end of 2013, the number is close to 50% (there are two separate contracts). If such an event were to take place before this year's US presidential election, it would be a major threat to Obama's reelection chances. After all the president's signature piece legislation ruled unconstitutional would give Republicans some powerful ammunition. 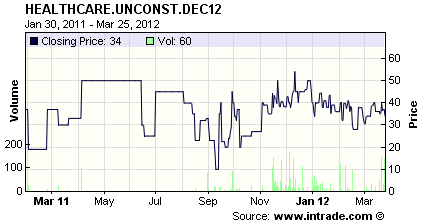 But before the US Supreme Court can make a ruling on the constitutionality of ObamaCare, it needs to determine if it can even make that ruling now. The judges will consider tomorrow if the decision on the constitutionality of the law has to wait until 2014 when ObamaCare is expected to take effect. The strange thing about this case is that both parties actually want the Court to decide now, not in 2014.

At the heart of the issue is the requirement for everyone in the US to buy health insurance, which many people don't support - and the piece of legislation that the Supreme Court will focus on. But another part of the law prohibits insurance companies from denying care due to a preexisting condition, which many of the same people support. But you can't force insurance companies to take on sick people without also giving them a bunch of healthy clients - otherwise they will go broke. This means that if the portion of the law that forces people to buy insurance is ruled unconstitutional, the rest of the law effectively falls apart. The stakes for Obama are high - the administration won't be able to modify the law and still keep it in place if the "insurance for everyone" requirement is ruled unconstitutional. And if ObamaCare falls this year, so will the president's chances for reelection.

Update: This post was removed from Reddit/Economics by the moderator with the following comments - obviously got someone really upset:

Third thing, whatever something is trading on 'Intrade' has nothing to do with the chances of it becoming unconstitutional, that's retarded.

1. ObamaCare is a perfectly good expression - it's quite descriptive. Plus the Obama administration itself uses it openly.
2. You missed the whole point. Even if the individual mandate is severable, the law falls apart because the insurance companies can't function without the individual mandate but with the rest of the law in place.
3. This may surprise you, but the markets are the best predictors of events - from recessions to elections outcomes. Even 9/11 was signaled in the markets.