US coal production declines as the industry faces further stress

Here is a follow-up to the post on the declining US coal demand. As natural gas hits a new low today, the pressure on US coal industry increases further.


The impact is unmistakable. The latest data from EIA is showing 2012 coal production levels materially below the 5-year range for this time of the year. 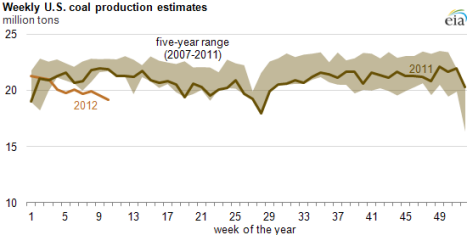 Making things even worse for the coal industry is the new EPA proposal to reduce carbon emissions by electricity companies. This proposal would turn the new coal-fired power plants into money losing investments.


Reuters: The first-ever U.S. proposal to restrict carbon dioxide emissions would have once been a major shock to electricity companies by making it uneconomic to build new coal-fired power plants.

But the irony is that the essence of the EPA's proposal has effectively already been usurped by low natural gas prices, which also turn coal-fired plants uneconomic.


Reuters: But the discovery of abundant supplies of cheap natural gas means that many of those plants won't get built anyway - making the Obama administration's plan, while painful for the coal industry, much less relevant.