Recently the Tianjin Port in China was showing record levels of coal inventories. Now the Qinghuangdao Port coal inventories in storage have also risen dramatically (ht Patrick Chovanec). But unlike Tianjin, Qinhuangdao is the world’s largest coal loading port handling half of China's coal needs (see this website for more background on  Qinghuangdao.)


Want China Times: - The amount of steam coal held in storage at the port city Qinghuangdao in northern China's Hebei province is approaching maximum capacity and has sparked safety concerns that the pile could combust without warning. Coal prices are set to continue to fall as high inventory levels have forced suppliers to try to boost sales.

Inventories at power plants are at the highs and the buyers are holding off. Pricing is becoming a problem and some coal buyers are walking away from their contracts.


Want China Times: - Industry insiders said the coal inventories of power plants are currently high and they will not buy any more coal for the time being unless the price falls to a certain level. The actual transaction value of the coal was reportedly lower than the price offered in Qinghuandao and is likely to continue to fall. 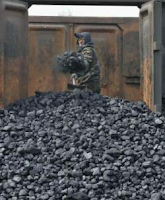 Reports have been heard of breaches of contract between coal traders in the country's coastal areas and forwarders. Coal traders and buyers have became more cautious as the price continues to drop, said Li Xuegang, the manager of a coal-trading market in Qinghuangdao. The industrial chain has seen its downward trend accelerated since they tried to increase sales through a low-price strategy to release inventory pressure and the outlook for the price of coal is poor in the short term, said Li.

During this time of the year coal inventories in storage normally build up, but this time the inventory build has hit record levels.


This is an indication of declining power demand across the country, as factory utilization slows and construction moderates.