FLS, a gift from the Bank of England to UK's lenders

The Bank of England recently implemented a new incentive program for banks called Funding for Lending Scheme (FLS) to encourage more lending to households and businesses  The idea is to give British lenders access to cheap financing for four years in return for expanding credit.

The financing is in the form of a four-year collateral swap. Banks deliver illiquid loans (pools of mortgages and small business loans) to BoE in return for UK Treasury bills. The bills are then used as collateral for cheap repo loans.


Bank of England: - Over the eighteen months to the end of January 2014 – the ‘drawdown period’ – the Bank of England will lend UK Treasury Bills to banks and building societies (hereafter ‘banks’). These will be lent for up to four years, for a fee. As security against that lending, banks will provide collateral – in the form of loans to businesses and households and other assets – to the Bank of England.

This type of transaction is known as a ‘collateral swap’. When the loans from the Bank of England mature after up to four years, the collateral will be swapped back again. This arrangement ensures that the risk from the loans remains the responsibility of the originating bank.

Banks can use the Treasury Bills they access in the Scheme to borrow money at rates close to the expected path of Bank Rate. Taking that rate together with the fee paid to the Bank of England gives the cost of funding for a bank using the Scheme. 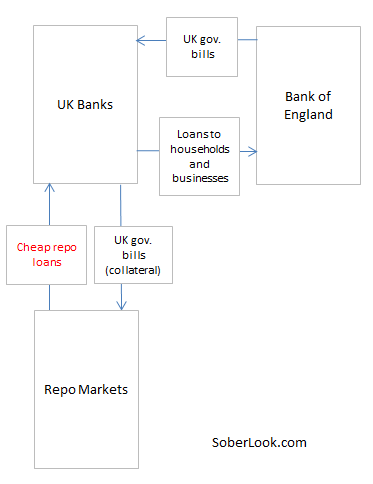 To encourage banks to lend more, the amount of this cheap financing increases if banks expand lending and declines if lending shrinks. Once again, it's a good scheme in theory, but may play out quite differently in practice.

Many banks have issued longer term debt that is coming due shortly (unsecured bonds). As this relatively expensive debt matures, they will simply roll it into FLS to reduce interest expense. There is nothing in the program that requires that new loans are exchanged for bills - existing loans on banks' books will do just fine. Banks will simply deliver their illiquid loan portfolios and use FLS to refinance their maturing debt.


Daiwa Capital Markets: - Ultimately, we expect U.K. banks to opportunistically use the FLS as a cheaper substitute for funding from bond issuance in the wholesale capital markets and, principally, to refinance existing bonds when they mature, as opposed to increasing lending to the economy.

The chart below shows how much FLS some of the largest lenders qualify for as well as lenders' debt maturing through 2014. Except for Nationwide, the bigger banks will have enough FLS capacity to repay a great deal or all of their maturing bonds. 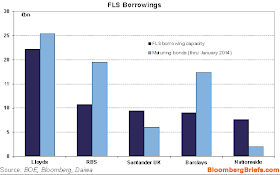 There is nothing in the program that requires UK banks to lend more and there is nothing to indicate that they will. Instead FLS is becoming a free gift by the Bank of England to the UK's banking system. FLS will be used to reduce interest expense and boost banks' profits. Of course given that the UK government owns large chunks of some of the lenders (Lloyds and RBS), maybe the UK taxpayer will benefit from the program after all.