Is Germany's economy turning the corner?

The DAX and other global equity indices continued to rally today, helped in part by the latest IFO business survey from Germany.

For the first time in months the IFO survey (see discussion) saw an improvement - in both the current situation and in the expectations of future conditions.


The Ifo Institute: - The Ifo Business Climate Index for German industry and trade rose again after six successive decreases. Companies expressed slightly greater satisfaction with their current business situation. They were also far less pessimistic about future business developments. The German economy is holding up in the face of the euro crisis.

In manufacturing the business climate index rose slightly following a six-month decline. Companies expressed slightly greater satisfaction with their current business situation. They were also less pessimistic than last month with regard to the six-month business outlook. Export expectations were positive for the first time in three months. 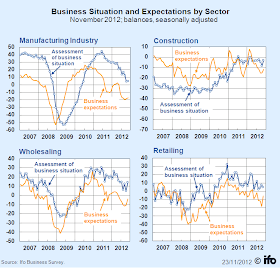 Another business survey, the Markit Germany PMI indicator, came in flat, but the numbers were better than the expectations.

WSJ: - The economic tide may be turning in Germany. After six consecutive declines, the widely watched Ifo Business Climate index rose in November, defying economists' predictions of a continued fall.

For Europe's biggest economy, the global picture, and in particular the performance of the U.S. and China, looks more important than the euro-zone crisis. With global growth less fragile, Germany's exports engine, itself one of the engines of the euro-zone economy, can fire up again.

The improvement in the Ifo index was broad. Manufacturers, construction firms, wholesalers and retailers were all more confident both about their current situation and, in particular, their expectations for the future. While service-sector sentiment declined, this tends to lag turns in manufacturing confidence.

The Ifo data corroborate a similarly unexpected rise this week in the Markit purchasing managers' index for Germany, which also showed improvement in manufacturing.

It is important to note that on the whole these latest indicators still point to an ongoing contraction in Germany's business sector expectations. The chart below plots the path of current vs. expected conditions - and Germany is still in the "Downswing" quadrant (headed toward "Recession"). 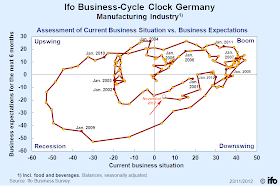 However the pace of the contraction is lower than the recent market expectations and may be pointing to an inflection in Germany's economic activity. The surveys' trend in the next couple of months should confirm if this stabilization is indeed real.