As discussed earlier the housing shadow inventory is in part being fed by re-defaults on modified mortgages. One of the comments we got (h/t rjs0) was that the recent spike in re-defaults (see post) may have been caused by the release of iPhone5 (impulsive borrowers would forgo mortgage payments to buy a new phone). That's a frightening thought (and an amazing achievement for Apple).

The larger picture however points to a decline in shadow inventory in 2013. JPMorgan anticipates 650K of re-defaults (could be worse if Apple comes up with a new popular product) and 1.2 million of new delinquencies. At the same time existing delinquencies are working their way through the "python" (see post from a year ago) - modifications, short sales, and liquidiations. The forecast is a net 380K reduction. 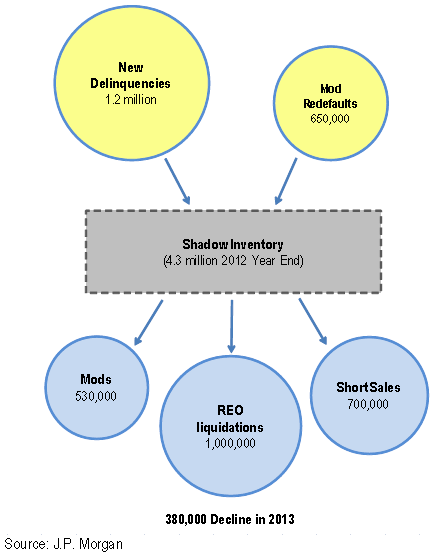