Bank reserve deposits normally decrease when the Treasury’s balances at the Fed rise as the money the Treasury takes in from taxes and debt sales is withdrawn from bank accounts, which in turn causes bank reserve balances at the Fed to fall. Then, in the next week or two, the Treasury spends that money and the resulting deposits are reflected in increased reserves at the Fed. That increase also represents the creation of economic credits that show up in the economic data for that week. When the Treasury sucks up cash as it does when it collects quarterly taxes or sells new debt, the economy slows for a few days, but when the checks go out, things pick up again. You can see the resulting weekly fluctuations clearly in a wide variety of unadjusted banking and money supply indicators.

Reserves also increase when the Fed settles the paper it buys from the Primary Dealers, offset by the Treasuries the dealers sell to the Fed. With the settlements of QE3 purchases now under way, reserves will begin to increase dramatically in the weeks where there are large settlements. Last week and this week are the first of those. The next week of MBS purchase settlements will be the week of December 12.

The Treasury deposited a net of $2.9 billion to its checking account at the Fed last week as the dollar amount of its revenues and net new debt sales were almost balanced by its outlays. This brought its deposit balance to near $27 billion in the week ended Wednesday.

Partly as a result, bank reserve deposits declined by $4.5 billion.

The mysterious “Other” depositors, however, added $31 billion to their accounts at the Fed. Ding-Ding-Ding and flashing lights, I think we now know what at least some the “Other” deposits are. They appear to be the Primary Dealer accounts used in their trades with the Fed’s SOMA. On November 14 the Fed settled some $36 billion in MBS purchases from the Primary Dealers. The dealers didn’t need to settle their Treasury purchases from the previous week until the following day, after the closing of the weekly Fed H41 statement, causing the cash in their accounts to bulge that day. 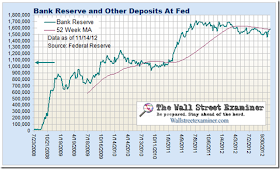 The next big round of MBS settlements will be in the week of December 12-20- over $70 billion. We should see a big jump in reserves in subsequent weeks.