Brazil's economy is gradually improving. DB for example is projecting a 0.8% quarter over quarter GDP growth, which looks sustainable over the longer term.


However, there are risks to this recovery. One of those risks has to do with Brazil's reliance on hydroelectric power - which is generally a good thing.


The Globe and Mail: - Brazil has long boasted about having one of the world’s cleanest energy grids due to its heavy use of hydro power, but a recent threat to its water supply is sending the country to the brink of energy rationing, raising concerns that Brazil will turn to more carbon-intensive energy sources to fuel its growing thirst for energy. 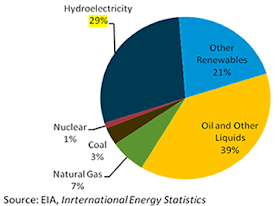 But it also means dependence on rainfall to fill the water reservoirs. And water levels have been significantly below normal.


The Globe and Mail: - Below-normal rains since November have depleted reservoirs at hydroelectric facilities to critical levels while consumption hits its seasonal peak.

The current situation has brought back memories of Brazil’s 2001 energy crisis, when factories and residences were forced to slash consumption amid country-wide blackouts.

Indeed, levels are below what they were during the 2001 energy crisis while power usage is 40% higher.

Here is a quote from the 2001 NY Times, when the power situation got ugly in Brazil:


A few months ago the Brazilian government imposed mandatory rationing of electricity. Violators, it said, would be punished. People scoffed, but more than a quarter of the country's 170 million residents are now having to adjust to a four-day work week, and they do not like it.

Much of the nation made the mandated cutback of 20 percent, or came close to it. But in nine states here in the northeast, the cutback was not even close to 20 percent, and the curtailed workweek went into effect on Oct. 22. It is expected to continue at least through November.

The region is home to 50 million people, including the largest concentrations of Brazil's poor. The cutback has forced schools and businesses to close; disrupted transportation, commerce and leisure; and intensified regional tensions.

Even though DB thinks that electricity rationing this time around is less likely, the uncertainty alone could dampen business confidence and slow economic growth. They view it as one of several structural issues (such as increased government interventions in the economy) Brazil may be facing going forward.


DB: - Even if Brazil dodges energy rationing, the uncertainty could hurt growth by undermining business confidence in investment. The energy crisis once again highlights Brazil’s structural constraints on growth.