Europe back in focus as Italy braces for a deadlocked parliament

All of a sudden Europe matters. As discussed last week (see post), Italy's election was creating risks of a "weak and fragmented coalition" that could slow down or even reverse the pace of much needed reforms. And now we are indeed looking at a deadlocked parliament, with little ability to form a coalition in the upper house.


Reuters: - A huge protest vote by Italians enraged by economic hardship and political corruption pushed the country towards deadlock after an election on Monday, with voting projections showing no coalition strong enough to form a government.

With more than two thirds of the vote counted, the projections suggested the center left could have a slim lead in the race for the lower house of parliament.

But no party or likely coalition appeared likely to be able to form a majority in the upper house or Senate, creating a deadlocked parliament - the opposite of the stable result that Italy desperately needs to tackle a deep recession, rising unemployment and a massive public debt.

Such an outcome has the potential to revive fears over the euro zone debt crisis, with prospects of a long period of uncertainty in the zone's third largest economy.

Of course people were quite surprised about the comeback of Berlusconi (discussed here back in December). It takes a crook to promise to pay the electorate for voting him in, but that's exactly what Berlusconi did. He tapped into the "electoral rebellion", and although he did not win, he certainly injected himself into whatever coalition that may end up being formed. 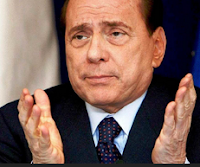 WSJ: - Surprising, too, was the comeback of Mr. Berlusconi, whose party was in the doldrums as late as November of last year. The 76-year-old billionaire politician's late surge is attributed largely to the media blitz in recent weeks.

"Whoever thought Berlusconi was finished will have to think again," said Angelino Alfano, head of the conservative People of Freedom party.
...
"The cost of austerity led to an electoral rebellion," said Enrico Letta, deputy head of the Democratic Party. "This is a complex situation to live and manage."

Italian government bond spreads widened in response and the euro sold off. 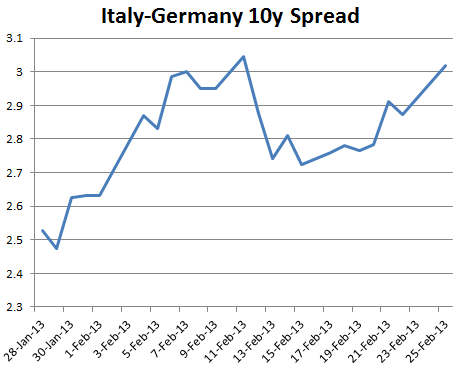 The market reaction was particularly strong in equities where Italian stocks took a real beating. The chart below shows market action over the past five days for EWI (USD-based Italian market ETF - blue) vs. SPY (S&P500 ETF - red).


Given that much of today's selloff took place after the European close, the markets' open in Europe tomorrow morning is expected to be ugly.