Brazilian central bank's highly accommodate policy in the past year and the recent weakness in the Brazilian real has helped boost growth.

But with economic growth stabilizing, the nation is beginning to face inflationary pressures (as predicted). Ultra dovish central bank policies, whether in Brazil or elsewhere, usually come at a price.


Reuters: - Brazil's inflation accelerated to the fastest rate in nearly eight years in January, raising bets of an interest rate hike this year that could complicate the government's drive to reignite a near-stagnant economy.

The Brazilian currency, the real , also jumped on the news, hitting a 9-month high against the dollar after central bank president Alexandre Tombini said he was worried about inflation. 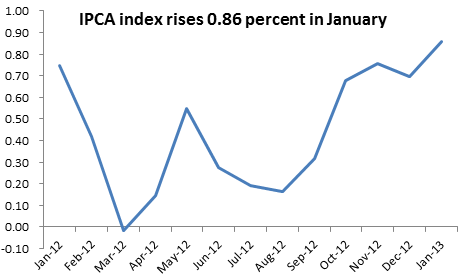 Brazil's inflationary pressures are becoming broad-based instead of simply focused on a particular sector of the economy.


GS: - What is of particular concern is that the acceleration of inflation in Brazil was broad-based, i.e., it was not driven by narrow-based shocks to just a few items. In fact, the Brazil IGI shows that items with a combined weight of about 60% in the CPI have annualized seasonally adjusted inflation now running above the 6.5% inflation target upper limit.

In response, the central bank is expected to begin raising rates aggressively - with futures already pointing to 100bp increase in the near future, - dampening the nascent economic recovery.