Jobless claims numbers should be interpreted with caution

The strong jobless claims data released today certainly represents a positive trend for the US economy. Combined with the US housing market recovery (see story from CNBC), the data may be pointing to material improvements in the labor markets in the near future.


Bloomberg: - Claims for jobless benefits plunged last week, showing U.S. employers have little need to trim staff as demand improves. Applications for unemployment insurance payments decreased by 27,000 to 341,000 in the week ended Feb. 9, fewer than any of the 49 economists surveyed by Bloomberg projected, according to Labor Department data issued today in Washington.

One should be careful however when extrapolating the path of US economic growth based on these numbers. First of all there is a great deal of noise associated with this data, especially on the seasonal adjustments.


Reuters: - But some economists said a blizzard that slammed the East Coast late last week and difficulties smoothing out the data for seasonal fluctuations could have artificially depressed claims.

While they were encouraged by the decline, they urged caution against reading too much into the data.

"Claims may not be giving a reliable signal about the labor market," said Daniel Silver, an economist at JPMorgan in New York.

It is particularly troubling to see some analysts draw a straight line through the seasonally adjusted initial jobless claims to determine how quickly the US labor markets may reach pre-recession levels. Stepping away from the seasonal adjustments, improvements in the claims number have been anything but linear. In fact a simple non-liner fit (from 2/7/09 to 2/9/13) shows a steady drop in the rate of declines. 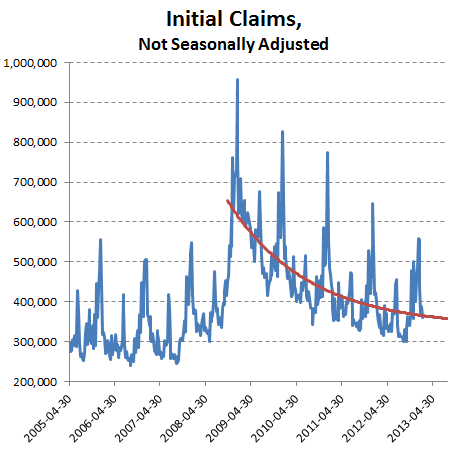 There are other factors making this trend less reliable as a measure of the labor market strength, such as a large pool of workers who no longer qualify for these benefits. We are clearly moving in the right direction here, but it's important to interpret the results with some degree of caution.