Looking for the next financial bubble? Just follow the quants.

The latest in the LIBOR scandal once again shined some light on RBS, the UK taxpayer-owned bank. The firm's culture that ultimately forced the UK government to execute one of the most expensive financial rescues in history was even worse than many imagined.


WSJ: - RBS's former head of investment banking, Johnny Cameron, who left the bank in early 2009, said traders at banks involved in the attempted rate manipulation had more in common with each other than other bank workers, and that their behavior seemingly had little to do with the firms they worked for.

It is "as much about the culture of traders and people who trade things than any bank," Mr. Cameron said in his testimony to the committee.

He said RBS's risk managers failed to recognize the potential for traders to influence submissions used to help set interest-rate benchmarks, and that the failure highlighted why traders need "tight and close management."

"I do think that traders have a particular approach to life and need much tighter controls. By and large, those controls are imposed. What happened in this case was that the risk managers didn't recognize this as a risk, and those controls were not there," Mr. Cameron said.

But RBS had a hefty risk management department back then, with some of the most sophisticated financial risk modelling in the industry and numerous risk analysts running around the firm "measuring" risk. The head of the market risk group (as well as quantitative analysis) at the time was Riccardo Rebonato (see bio on Wikipedia). So how is it that the exposures (particularly in mortgage portfolios at the subsidiary called Greenwich Capital) as well as trading practices at the firm were allowed to spin out of control under the watchful eye of Dr. Rebonato? It so happens that Dr. Rebonato did not seem to be too concerned with how to keep the bank from collapsing and instead was focused on writing his new (at the time) book called Plight of the Fortune Tellers. In fact the book was published while Dr. Rebonato was still at RBS (in 2009).

So "who cares?", one may ask. If Dr. Rebonato has done such a stellar job at RBS during the housing bubble, one should be asking "where is he now?"  It turns out that he has a new role, this time at PIMCO. And it is likely that he is working on his new book - to be released after the next financial correction. This and similar hires at the large fixed income asset managers (such as Blackrock, who is actively hiring quants in the risk management area) may be pointing to the next financial bubble (see discussion). 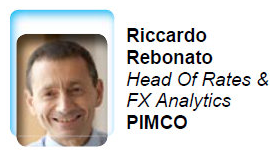