The Guardian: - Spain's answer to RBS – Bankia – published the worst results ever seen by a Spanish corporation, racking up 2012 losses of €19.2 bn (£16.6bn) as the nationalised bank drowned in a sea of toxic real estate left over from the country's burst housing bubble.

The figures confirmed the dire fortunes of a bank formed out of a merger of seven of Spain's ailing savings banks in 2010 as the government made a futile attempt to save them from disaster. Client flight during 2012 helped bring a 13% fall in total deposits.

Bankia became the focus of Spain's banking crisis last year after auditors refused to sign off on the accounts presented by company president Rodrigo Rato, a former finance minister from prime minister Mariano Rajoy's People's party (PP) and one-time head of the International Monetary Fund. It is now taking €18bn in bailout funds from the country's Frob bank restructuring fund, which had to borrow the money from the eurozone's bailout fund as part of a €40bn rescue of several struggling banks.

2012 has been particularly difficult for Spanish banks who relied on domestic deposits. Panicked depositors moved cash to Germany or even out of the Eurozone altogether to Switzerland. That forced the banks to tap the ECB's long and short-term lending programs for most of their funding needs.

But there may be some good news on the horizon. Some deposits are returning to Spain - cash flows recently turned positive. The flow data has a great deal of noise due to the effects of recent tax deposits as well as the issuance of commercial paper (pagares). The adjustment for pagares is shown below.


Whatever the case, the "run on banks" taking place in Spain a year ago seems to have stopped - for now. That in turn slightly reduced banks' reliance on the ECB, particularly in the short-term funding program (MRO). 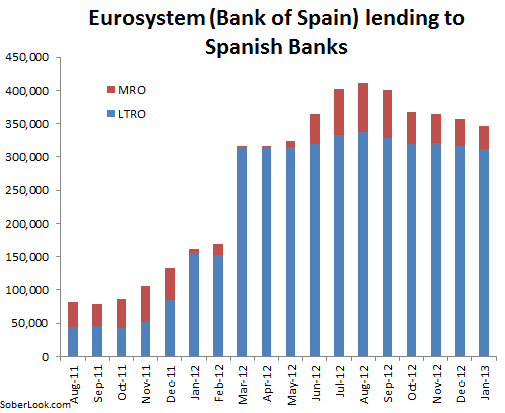 And as discussed before (see post), this reversal of flows should reduce Spain's TARGET2 liability - which is exactly what happened. 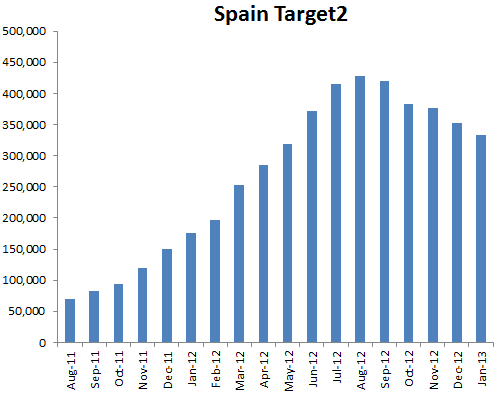 Clearly, both of these measures are highly elevated relative to historical levels, but nevertheless the "bleeding" has been contained.