As discussed earlier (see post) the French economy continues to struggle. The nation's consumer recession is now thought to be worse than Italy's.


Markit (Trevor Balchin): - “France has overtaken Italy as having the worst performing retail sector of the three largest euro area economies. Sales fell at a survey-record pace, as did employment. Italy registered another steep drop in sales, while German retailers witnessed a flat trend in March.”

French economic output data suggests that the GDP growth - which has been lagging the Output PMI Index - will be in the red for a good portion of 2013. 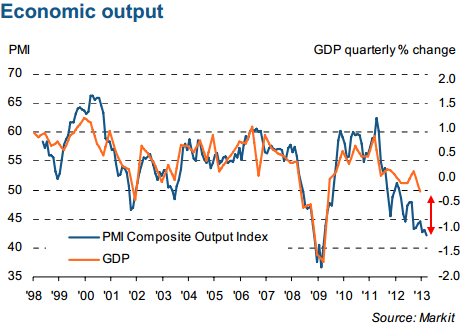 A big part of the economic stagnation in France was caused by the implementation of the country's own version of the "fiscal cliff".


WSJ: - Mr. Hollande's government responded to the weaker economy in 2012 by raising taxes by €7 billion ($9 billion) to try to limit the damage to public finances. If the government hadn't done this, along with a smaller effort to curb public spending, the deficit would have increased above 5.5% of output, finance minister Pierre Moscovici said in a radio interview Friday. Another €20 billion of taxes have since been introduced for 2013.

But there is now evidence that tax increases are hurting the economy with Insee reporting that consumer spending power fell last year for the first time since 1984. Households, who typically make up well over half of GDP, cut their spending for the second month in a row in February and haven't spent as little since June 2010, Friday's data showed.

Retail sales indicator in France now points to conditions that are worse than during the 2008 recession.


As the French recession deepens, it is dragging down economic activity indicators for the Eurozone as a whole.


Moreover, the current crisis in Cyprus is expected to reverberate across Europe. In spite of being a tiny portion of the EMU's GDP, the psychological impact of Cyprus' botched "bailout" on the area consumers (and possibly banks) is expected to be material. The markets have in fact begun pricing in worsening economic slump in the Eurozone, particularly relative to the US. The recent decline in the euro has been relentless.


The confluence of Cyprus events and the recession in France and elsewhere across the area has prompted JPMorgan economists to downgrade their expectations for the Eurozone 2013 GDP growth - once again significantly below consensus. Europe just can't catch a break.