A slowdown in US lending or a ramp up in shadow banking?

We've received a number of emails pointing to what looks like a slowdown in lending by US-chartered banks. The amount of loans and leases on balance sheets of US banks has stopped growing. 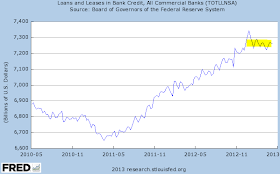 As in 2009 and 2011, some people are upset to see record levels of bank excess reserves that are not being turned into loans. These are deposits at the Fed earning 25bp and people are asking why banks are not lending more of this capital out. 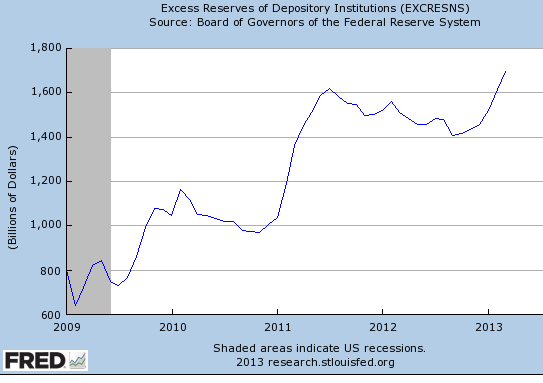 But what exactly caused the loan growth on banks' balance sheets to stall? More precisely, what types of loan balances are no longer growing? It turns out that while commercial and industrial loans continue to grow - in fact accelerating - the growth in retail mortgage balances has stalled. And that's the explanation for the flat-lining of the overall loan balances (the first chart above).


"Aha", some economists would say. Banks are not extending as much credit in the mortgage space as they should, which is slowing down the economy. Those evil zombie banks...

The real answer however has to do with the wonderful world of "shadow banking". Why would banks want to keep all these mortgages on their books when they can blow them out to Freddie and Fannie, who in turn sell them to the market in the form of agency MBS (mortgage backed securities). And who are the buyers? The usual suspects of course - insurance firms, mutual funds, etc., as well as the biggest buyer of them all - the Fed. In fact the holdings of MBS on Fed's balance sheet just hit a record. Mortgages are simply making their way from banks' balance sheets onto the Fed's balance sheet in the form of MBS.


The data from Freddie and Fannie confirms this trend, with the first quarter of this year showing the largest net MBS issuance volume in two years. As much as people don't like to think about it this way, Freddie and Fannie are the biggest "shadow banks" around. 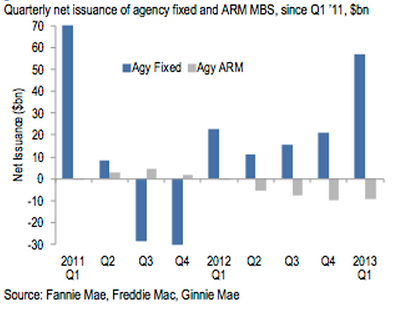 The last time we had a spike in MBS issuance in early 2011, mortgage balances at banks declined, as banks did some "spring cleaning".

But what about loans that are not Freddie and Fannie eligible? Those should still be sitting on banks' balance sheets, right? Not exactly. The private side of shadow banking is now kicking into gear, particularly in the so-called jumbo loans (mortgages too large to qualify for the GSEs).


Inside Mortgage Finance: - The private-label market is "showing new signs of life," according to Standard & Poor’s, which predicted that banks are likely to increase their securitization of jumbo mortgages. In a report released late last week, S&P projected $14 billion in non-agency jumbo MBS in 2013. Redwood alone set a goal of issuing $7 billion in non-agency MBS this year and is on pace to exceed that volume, helped by a pending $425 million deal, its sixth of the year. PennyMac Mortgage Investment Trust is also aiming to issue a non-agency jumbo MBS in the Redwood mold in the third quarter of 2013.

The demand for fixed income product has manifested itself in the so-called "private-label" MBS, allowing banks to securitize mortgages that don't qualify for Freddie and Fannie. Once again, it's not about lending less - which is how some economists are reading the first chart above. It's about originating product, collecting fees, and then selling into the hot securitization market - public or private. And taking those loans off the balance sheet creates room to do it all over again (the "recycling" of capital.) As one banker put it, "I want to be in the origination and fee business, not in long-term warehousing ..."