Anglo Irish Bank back in the news

As promised in the previous post on Ireland, here is an interesting e-mail from a reader discussing some of the facts around the Irish banking system bailout - particularly as it relates to Anglo Irish Bank: 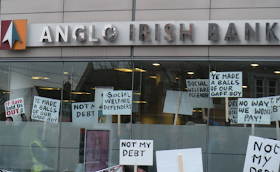 In September 2008, Anglo requested a meeting with the then Minister for Finance Brian Lenihan requesting a government bailout to solve their “liquidity problem”.

The other Irish banks also lobbied Lenihan and this led to the creation of the Bank Guarantee indemnifying all of the Irish retail bank liabilities to the value of €450 billion.

The Guarantee’s introduction caused consternation in Ireland, UK and throughout the Eurozone because it saw deposit flight from the UK banks to Irish banks (Alistair Darling at the time had strong words with Lenihan).

Anglo claimed that its problems were temporary and that it needed bridging liquidity when in fact the bank was gravely insolvent.

Anglo’s accumulated reserves and shareholder funds were eviscerated, with questions arising about loans to directors, an alleged Guiness-type share support scheme and a bizarre cash where deposits from other Irish banks were put on deposit at Anglo at their balance sheet date to artificially boost their deposit balance for reporting purposes (see link).

A series of promissory notes were created to cover the cost of €30 billion cost of refinancing, all funded by the hard pressed Irish taxpayer IBRC was subsequently liquidated in March 2013 (see discussion).

The Irish Independent newspaper claims to have a lot of tapes which it intends to publish here. The conversations that were taped using the banks recording system were recorded a few weeks prior to the Anglo meeting with Brian Lenihan in September 2008.

You will hear the Anglo bankers talking about how they told the Irish Central Bank about what it (ICB) needed to do to save the Irish banking system, by saving Anglo.

It is explosive stuff and the contents of these tapes has led to a lot of public anger about the bailing of this insolvent bank.