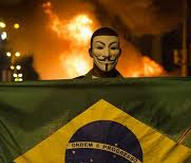 The Guardian: - Brazil's president, Dilma Rousseff, and key ministers are to hold an emergency
meeting on Friday following a night of protests that saw Rio de Janeiro and dozens of other cities echo with percussion grenades and swirl with teargas as riot police scattered the biggest demonstrations in more than two decades.

The protests were sparked last week by opposition to rising bus fares, but they have spread rapidly to encompass a range of grievances, as was evident from the placards. "Stop corruption. Change Brazil"; "Halt evictions"; "Come to the street. It's the only place we don't pay taxes"; "Government failure to understand education will lead to revolution". Rousseff's office said she had cancelled a trip to Japan next week.

Many are asking how is it that this "economic miracle" has generated so much anger. As discussed earlier (see post), Brazil's tremendous growth combined with the wealth of natural resources masked a number of problems. Taxes and corruption are of course a big part of the issue. Allocation of certain resources to high profile projects at the expense of healthcare and education is another. But as has been the case throughout history, social unrest is often triggered by rising prices - particularly on items that the average citizen cares about.


Active investors have become increasingly jittery (both foreign and domestic). The real has dropped to 2.25 per dollar and the stock market continues to tank (down 22% year-to-date). What's particularly alarming however is the sell-off in government bonds. Even the short end of the curve has not been spared. The one-year note yield just rose above 10%. The concerns seem to be less about the government's ability to repay as they are about currency devaluation. Whatever the case, this is a troubling development that has the potential of spreading across other economies. The global capital markets are now even more susceptible to contagion than they were in 1997 during the Asian financial crisis.