Freddie's lawsuit over LIBOR manipulation may be an uphill battle


The Telegraph: - America's two largest mortgage lenders could have lost more than $3bn (£1.85bn) as a result of banks’ alleged manipulation of Libor.


WSJ: - Freddie Mac sued more than a dozen of the world's biggest banks for alleged manipulation of interest rates, in the first government-backed private litigation over the rate-rigging scandal.

When it comes to the LIBOR scandal, it was never a question of guilt (see discussion). The issue has always been around methods for estimating damages. What should the LIBOR rate have been if it wasn't manipulated?

The Office of Inspector General of the Federal Housing Finance Agency had a good idea. Why not use the Fed's measure of deposit rates as the benchmark. The Fed publishes these rates daily under "Selected Interest Rates (Daily) - H.15, Eurodollar deposits (London)" (here) and it is supposed to measure the same thing as LIBOR. The difference between the two indices is that the Fed's measure is a broader sampling of banks vs. LIBOR, which is compiled by the British Bankers Association. Also since no contracts are priced using the Fed's calculation, there would be no reason for anyone to attempt to manipulate it (see memo from the Inspector General below).

By comparing the two indices, one would presumably be able to determine the damages based on the LIBOR linked portfolio (LIBOR-linked mortgages for example) held by Fannie and Freddie during the period in question. The portfolio should have received more interest income than it did. 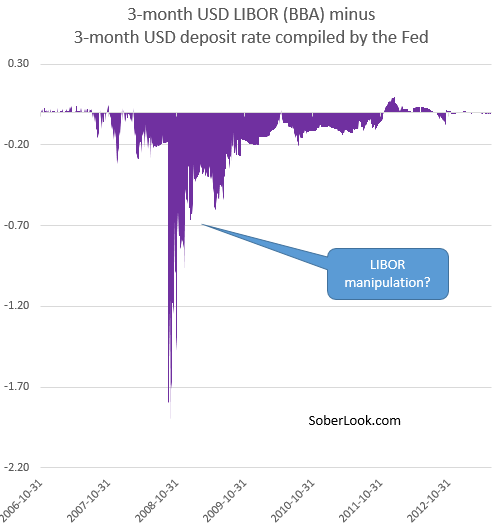 So far so good? Maybe the proud owners of Fannie and Freddie (the US taxpayers) would be able to recoup some damages. Unfortunately it's going to be an uphill battle for a couple of reasons:

1. Banks reporting to the BBA are larger on average than those in the Fed's sample list. The banks will argue that their borrowing costs - and therefore LIBOR - during the crisis would have been lower because of their size, even without the manipulation. Furthermore, the "quotes" from smaller banks are even less reliable, given they had zero access to the unsecured interbank market. That argument puts the amount of damages in question because it is no longer just based on the difference between the two indices. In reality the big banks were quite stressed, and LIBOR should have been higher, but without some actual interbank transactions, good luck trying to prove it.

2. According to the Fed, it gets it's deposit rates from "Bloomberg and CTRB ICAP Fixed Income & Money Market Products". ICAP is an interdealer broker who is supposed to see transaction flow and provide market data to subscribers. It's a well respected source of pricing data, but is it reliable enough to hold up in court? Once again it's going to be difficult, given ICAP's current dilemma:


WSJ: - A top executive at brokerage firm ICAP knew of an arrangement with UBS that U.S. and British regulators allege was part of a scheme to rig benchmark interest rates, according to people familiar with the matter.

The ICAP executive, David Casterton, was included on emails between ICAP and UBS officials in 2007 as they negotiated a deal that regulators say was designed to compensate ICAP brokers for helping UBS traders manipulate the London interbank offered rate, or Libor, these people say. Mr. Casterton ultimately signed off on the arrangement, they say.

British regulators have described the arrangement, which they say involved UBS making quarterly payments to ICAP allegedly to reward brokers for helping rig Libor, as "corrupt." The Swiss bank admitted wrongdoing when it settled Libor-rigging charges with U.S. and British authorities last December.

This doesn't make the banks any less liable for LIBOR manipulation, but given the source, a good lawyer will focus on the reliability of the Fed's measure as the benchmark. With enough doubt introduced, the banks will then claim that the damages due to the actual LIBOR manipulation are significantly lower than what could be determined from the difference between the two indices. In the end, the taxpayers are likely to get some money back, but these issues will make the actual payout significantly smaller.