Update on China's funding situation: throwing out the baby with the bath water

China's short-term rates have now spiked to double digits while the PBoC continues to ignore the problem.

A severe liquidity squeeze has hit China's interbank money market since early June, but the People's Bank of China has declined to aid the market with aggressive fund injections. 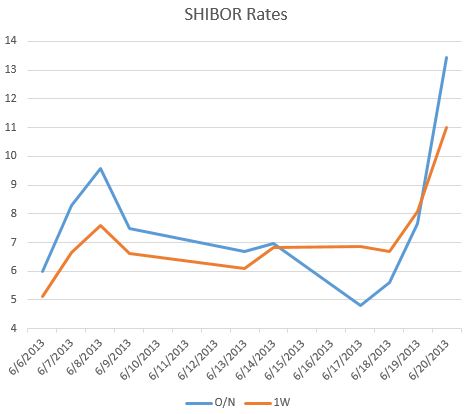 More media outfits have picked up the story.


NY Times: - “China’s interbank market is basically frozen — much like credit markets froze in the United States right after Lehman failed," said Patrick Chovanec, managing director and chief strategist at Silvercrest Asset Management. "Rates are being quoted, but no transactions are taking place.”

Numerous theories continue to circulate around the PBoC's rationale for letting the situation worsen. The prime candidate of course is the central bank's desire to tighten the various shadow banking programs and speculative market activities in order to "accelerate reform".

There has also been a suggestion that some in the private sector have been trying to repatriate currency into dollars. And by injecting liquidity, the PBoC would suddenly weaken the renminbi, which they want to avoid. Doesn't sound like likely scenario, but worth bringing up.

The danger here is that many so-called "wealth management" programs that banks have been running, have longer dated maturities and are funded with short-term money. Tightening the supply of short term money will make it harder to run these programs but will also expose some financial institutions to bankruptcy and even a broader potential panic. This is not substantially different from longer dated structured credit bonds in the US funded by commercial paper (ABCP) or via repo (Lehman for example) in 2007. We all know how that turned out.


NY Times: - To some extent, this is fundamentally a Ponzi scheme," Xiao Gang, then the chairman of the Bank of China, wrote in an opinion column in China Daily last October, referring to the mismatch between the maturity of wealth management products and the loans they pay for. "The music may stop when investors lose confidence and reduce their buying or withdraw" from the products, he wrote. Mr. Xiao now serves as the chairman of the China Securities Regulatory Commission.

During periods of booming economy the nation could potentially withstand such a shock to the banking system. But as we learned this morning, China's manufacturing is contracting again. By hitting the shadow banking system, the PBoC is tightening credit across the board - throwing out the baby with the bath water.


Let's hope China is prepared for its own version of the Great Recession.