Gasoline demand has been stronger than expected recently and the refineries are trying to keep up.


WTI crude futures jumped in response, with gasoline futures following, and prices at the pump expected to rise in the next few days.


This strong refinery demand and higher prices will increase pressure on firms to deliver more crude to the Gulf Coast. While certain pipeline projects have been instrumental in supplying the market with more crude, a good chunk of the delivery in North America has been via rail. 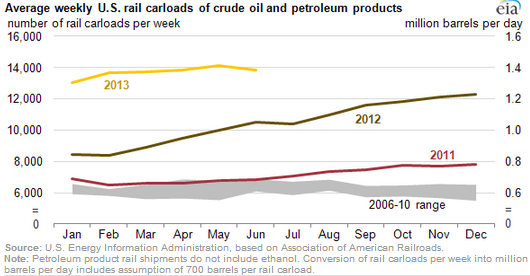 But after the horrific train accident in Quebec this weekend (the train was bringing US crude to a Canadian refinery) we will likely see new political pressure on rail transport firms, potentially resulting in lower volumes and/or more expensive delivery.


BW: - The question now is whether the devastating accident will poison the oil industry’s burgeoning love affair with the railroads. Since 2011, billions have been invested by refiners, railroads, and oil and gas companies to extend existing tracks into the mouths of refineries on the coasts. According to analysis done by Citigroup, the amount of oil that refiners are able to take from trains increased by a factor of 16 from 2011 to 2013. Just three years ago, refineries along the Gulf Coast were able to take delivery of only about 85,000 barrels of oil per day by rail. By the end of this year, refineries on all three coasts (East, West, and the Gulf) will be able to take 1.4 million barrels of oil per day.

With the pipeline system clearly inadequate to meet this already massive and rising demand, could a slowdown in rail delivery force fuel prices higher? Also is this potentially a game changer for the Keystone XL project, as "pipeline vs. rail" environmental impact may now be reconsidered? Whatever the case, this rising demand in the Gulf Coast will be important to watch for signs of shortages that could result in much higher prices at the pump.