In their recent report Barclays Capital researchers suggested that Japan's prolonged deflation has at least in part been driven by demographics. For years Japan's "wage curve's" shape has been highly unusual relative to other developed economies. The "wage curve" for the purposes of this discussion is defined simply as per-capita wages versus workers' age at a point in time. And in Japan wages have consistently peaked around the age of 50.


Now take a look at how quickly Japan's population is aging relative to the rest of the world. This is pushing increasingly large numbers of workers "over the cliff" on the wage curve. 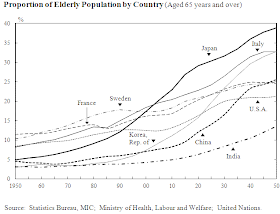 As a result, Japan has been experiencing relentless downward pressure on wages, contributing to ongoing deflation.


Barclays researchers argue that another key factor pushing wages lower has been the disappearance of "downward rigidity". In the US when things get tough, companies cut costs by laying off workers (volume adjustment). In Japan costs are more commonly reduced through wage cuts (price adjustment).


When things improve however, wages don't go up to the original levels - at least not quickly enough. Employees, even when not needed, remain on the payroll, contributing to a stagnant labor force (low labor force mobility) and slow improvements in productivity.

Why has this problem with Japan's wage deflation become a major issue all of a sudden? Because recently the Bank of Japan's balance sheet has ballooned,


... resulting in weaker yen and finally a positive inflation number that is expected to grow further (BOJ's target is 2%). 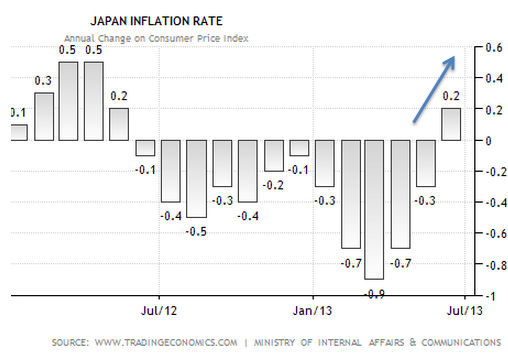 However, rising inflation and falling wages could be a recipe for disaster. It's OK to take a pay cut when prices are falling, but it just doesn't work in a positive inflation environment. That is why, according to Barclays, the most important task for Japan's new government will be to implement labor reform in order to allow wages to rise with inflation.


Barclays: - As long as Japan targets 2% CPI inflation on a sustainable basis, it must create an economy conducive to higher wages. We believe this requires a determination to change the structure of the economy, especially the labor market.
...
Monetary policy has the power to raise prices and price variables such as nominal wages to a certain extent. However, monetary policy does not have the capacity to determine the relative relationship between nominal wages and prices ...

... So when considering whether Japan can escape deflation with an accompanying rise in real wages, there is a need to think about labor productivity in addition to monetary policy.

The task is daunting because it will require wage growth in the face of global competitive pressures, potentially resulting in rising unemployment. But without real labor mobility improvements, the unprecedented monetary policy experiment in Japan could prove ineffective. And Prime Minister Abe has three years to implement these reforms before more workers go "over the cliff" on the wage curve in the face of rising prices.


The Japan Times: - Sunday’s sweeping victory by the Liberal Democratic Party-New Komeito ruling bloc in the Upper House election put an end to the divided Diet and hopefully to the “revolving door” of prime ministers over the past seven years, as ridiculed by foreign media.

That is at least until the next Lower House election, which must be held within the next three years. ...