Today's news of a sharp decline in new home sales has left many economists scratching their heads, trying to understand the trajectory of the US housing market. And here is what they are struggling with: 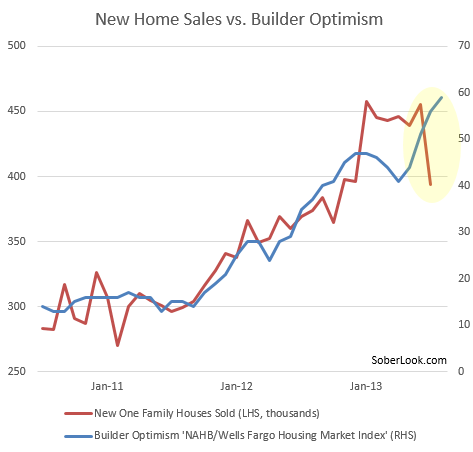 With the homebuilder survey showing tremendous optimism while new homes not selling well, there is clearly a disconnect. Just as other economists, Goldman's research team is having a tough time reconciling the two. GS also points out that new home sales represent a somewhat more timely indicator than the existing home sales number - which was quite strong in July (see this post).


GS: - Based on contract signings rather than closings, new home sales are a slightly more timely indicator of housing activity than the stronger-than-expected July existing home sales data released earlier this week. The recent weakness is concerning in light of the rise in mortgage rates in recent months and drop in new purchase mortgage applications. However, the weakness in new home sales stands sharply in contrast to the NAHB homebuilders index, which points to more favorable prospects for housing starts and new home sales in coming months.

In spite of the conflicting data, Goldman's research team decided to downgrade its forecast for the 3d quarter GDP to 1.8%.  Long-term interest rates may be having a far deeper impact on the economy than previously thought.

It is worth mentioning that this forecast does not bode well for the success of the Fed's latest round of monetary easing: