Gold lease rates have risen dramatically this year. In fact on the short end, lease rates are now higher than US dollar interest rates - which is quite unusual.


Part of the reason for rising lease rates this year is an increase in hedging activity ahead of the Fed's series of decisions on QE3. Investors, mining firms, banks, etc. who are long gold are selling gold forward contracts as a hedge against their positions. The providers of these forwards (usually dealers) hedge themselves in the physical market by borrowing gold for a fixed period and shorting it into the spot market. A forward contract provider thus becomes long a gold forward in the derivatives market (via forward they bought from a client) and short a gold forward in the cash market (via a combination of lease and a physical short) - thus fully hedged. The demand to borrow physical gold in order to short it is forcing lease rates higher.

The combination of much higher lease rates and low short-term dollar rates has created an unusual gold forward curve. Here is what the COMEX gold futures curve looks like now. The curve is quite flat in the front and even inverted in the first two months. 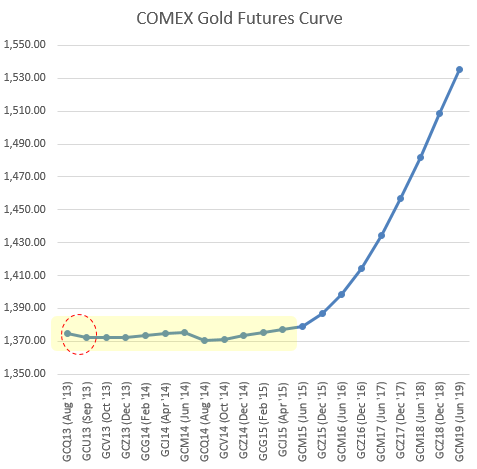 Note that the futures curve begins to rise in the first half of 2015, around the time of the Fed's first expected rate hike. The inversion in the front end (Aug-Sep backwardation) is highly unusual for gold (would only happen when lease rates exceed short-term dollar interest rates.) In fact this has not happened over a 4-week period at any time during the past 30 years - until now.


As long as hedging activity stays strong, demand to borrow physical gold will keep lease rates elevated. In the intermediate term this is probably a positive for spot gold prices because if the hedging activity slows, dealers will be covering their spot short positions and not rolling into new ones.