Could rising rates fuel credit growth in the US?

This may seem counterintuitive, but Deutsche Bank’s researches argue that "moderately" higher rates may actually improve lending. This certainly contradicts the traditional school of thought followed by the Fed, who seemingly became spooked by the recent rate spike.

In fact loan growth was beginning to slow even as rates touched historical lows. As the chart below shows the 10yr treasury yield of under 1.5% (weekly average) was reached around the time the rate of growth in US lending had peaked. With a steeper yield curve lending becomes more profitable for banks and return on capital starts to make sense for certain credits that could not be underwritten at lower rates. Is it possible that letting rates rise instead of continuing with the “pedal to the metal” stimulus approach, will actually benefit credit growth?


DB: - … moderately higher rates are allowing lenders to ease credit standards for borrowers. In point of fact, last month’s Fed Senior Loan Officer Survey (SLOS) showed an easing of standards across all four major lending categories (i.e., commercial/industrial, consumer, residential and commercial real estate loans). To the extent that higher interest rates allow banks to earn a higher return on their investment—it is notable that most of the rise in rates has been due to a steepening of the curve—then higher yields can actually galvanize lending. In other words, extremely low rates will not stimulate the economy much if banks are only lending to their most creditworthy customers. Consequently, higher rates should correspond to more credit provisioning, which all else being equal should be supportive to real GDP growth. With the supply and demand for credit increasing, we view this as a potentially very powerful tailwind to the economy over the next year or so. The fact that credit is more available, albeit at a higher price, is more stimulative to the economy than when the price of credit was cheaper but unavailable. 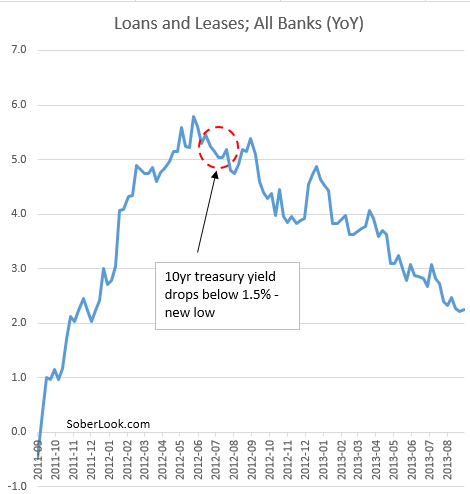