Credit Suisse recently pointed out an important fact about US sovereign credit default swap (CDS) mechanics. US CDS is based on treasuries (linked to a specific security - the co-called "reference obligation"), which according to the official offering document (see offering circular here), do not have a "grace period". Under such circumstances sovereign CDS documents dictate that the grace period is three days before an event of default is declared. That means if the US Treasury fails to make a principal or interest payment on any treasury security, an ISDA credit event will be triggered after three days. Markets move much faster than politicians. 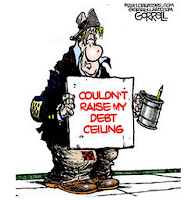