ABS market is on a roll again

After a rough patch this summer (driven by "taper" fears), consumer asset backed securities (ABS) business is heating up again. The bulk of that business is represented by auto and credit card loans. The pick up in demand is visible in the ABS index credit default swap contract called ABX.


As a result of this liquidity, this year's car purchaser will generally have no problem obtaining credit. This even applies to some so-called sub-prime auto borrowers with low credit scores.


Furthermore, some of the longer term auto financing (5 years and longer) is on the rise.


Fitch Ratings: - Auto loans with original terms of 60+ months (longer-term loans) increased in 2012-2013 auto loan ABS transactions versus 2009-2011 pools. Though Fitch Ratings believes the growth of these types of loans could be negative, as they have potential for increased loss severity, we currently view these loans as underwritten to account for this additive risk and do not expect transaction asset performance to be significantly affected.

In spite of popular belief that ABS securitization business is limited to major "Wall Street" banks, the large regional players love this business even more. In this regulatory environment banks' ability to build a book of auto loans and then blow out a large portion of it via securitization is particularly appealing.


Fitch Ratings: - ... Fitch sees the revival of auto ABS issuance partly as an effort by these banks to gain some regulatory relief on capital and liquidity requirements.

Aside from Huntington Bancshares, few large U.S. regional banks have been frequent issuers of auto ABS paper recently. However, Fifth Third, M&T Bank and other lenders have launched new deals. Many of these transactions have been upsized from initially proposed levels.
...

Banks are likely viewing the openness of the market as an opportunity to swap out less liquid loans for securitizations that stay on the balance sheet but receive more favourable treatment under Basel III with respect to capital and liquidity.

Why do investors love this asset class? There are two key reasons:

1. Consumer ABS loans' tenor tends to be relatively short. Even a 5-year auto loan is far easier to get comfortable with than a 30-year mortgage.

2. Delinquency rates on ABS have been benign.  Prime auto loan delinquencies for example are near historical lows. 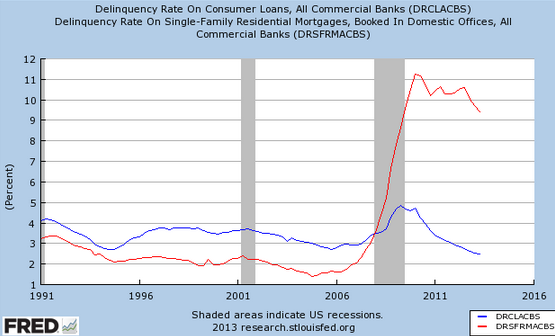 This spectacular divergence that started with the housing recession in 2007 persists through today and continues to make ABS assets attractive on a relative basis.