GOP leadership faces the harsh realities of the polls

The Republican party has a problem. The government shutdown seems to be helping the president in the polls. 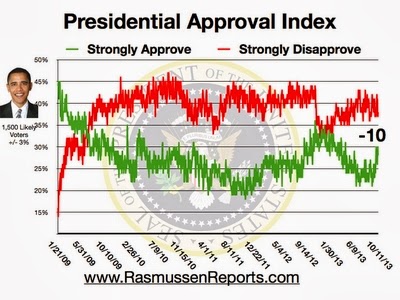 Simultaneously Republicans' image is getting hammered, as an increasingly growing proportion of US voters blame them for the shutdown.


Associated Press: - The Associated Press-GfK survey affirms expectations by many in Washington - Republicans among them - that the GOP may end up taking the biggest hit in public opinion from the shutdown, as happened when much of the government closed 17 years ago. But the situation is fluid nine days into the shutdown and there's plenty of disdain to go around.

Overall, 62 percent mainly blamed Republicans for the shutdown. About half said Obama or the Democrats in Congress bear much responsibility.

This is not about who is right or wrong - these are simply the facts. And the GOP needs to pay attention, particularly as the mid-term election year approaches. Apparently they have been. With the White House having the upper hand in the polls, it seems that Rep. Paul Ryan has been tagged to get the GOP out of this mess. A senior Republican congressional staff member has told Sober Look that Ryan was asked to help "end the shit show". Looking beyond the typical rhetoric on both sides, he seems to be making some progress.

"And at that point, both Democrats and Republicans say, the tone of the meeting changed," King said. "The president said, "'Listen, I'm not going to negotiate with you until you reopen the government, but go to your members, find out what you need to do to get that part done and let's try to make some progress.'"

CNN's reporting on the meeting is based on accounts from multiple sources who attended. The meeting appeared to help begin to break the logjam that has kept parts of the government shut down for 11 days, leaving hundreds of thousands of federal employees without work and causing countless ripple effects, from lost tourist revenue around national parks to a threat to the Alaskan crab fishing season.

Let's hope it works. The debt ceiling alarm clock will wake up the nation in exactly one week.