Has the Great Recession created behavioral changes in the labor markets?

The US civilian unemployment rate, which clocked at 7.2% last month, has been declining at the fastest rate in nearly two decades. The focus however has been on other labor market indicators. One of those is the employment-population ratio, the proportion of the US working-age population that is employed (discussed here). With declines in the unemployment rate one would expect an increasing fraction of working-age population getting back to work. The ratio however has remained nearly constant since the recession. 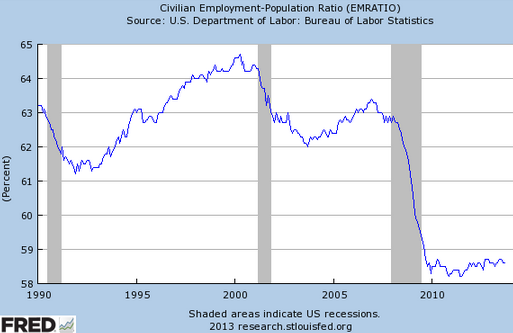 The dispersion between the two measures is quite clear if one plots them on a year-over-year basis.


Most would interpret this divergence as an indicator of Americans leaving the workforce in large numbers, particularly as their unemployment benefits run out. But that's not the full story. The question is whether the Great Recession had created "behavioral changes" in the labor markets. Here are a few points worth addressing with respect to the flows in and out of the workforce (based on recent work by Robert Mellman/JPM):

1. Are people more likely to get discouraged and leave the workforce after the Great Recession than in the past? The answer is quite surprising. The "dropout rate" is actually similar to historical trends.


JPMorgan: - Despite the background of high unemployment, drop-out rates of the unemployed are surprisingly similar to prior expansions.

2. Then why have so many people left the workforce? The answer is simple. Taking roughly the same "dropout rate" as before but applying it to a much larger number of unemployed people than in the past will create a large total "drop-out" pool.

3. But are those who exited the workforce more reluctant to reenter the job market than has been the case historically? Once again it turns out that the "reentry willingness rate" is not materially different from history.

4. Why has the employment-population ratio not budged since the recession? One of the persistent problems with the US labor markets is the current pool of unemployed people taking far longer to find work than in the past. This would suggest that the key for those without work is to enter the workforce as quickly as possible - even if it means part-time, temp, consulting, etc. The barriers to re-entry are much higher these days than any time in recent decades.


JPMorgan: - The labor flow data show that the chance of an unemployed worker finding a job in a given month fell dramatically during the last recession and has remained near its lows since. 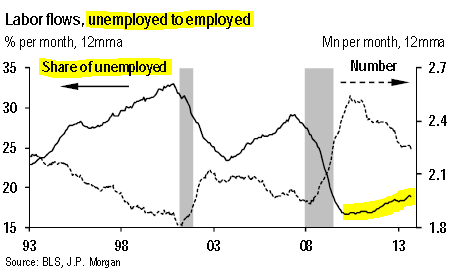