Market distortions in the short end of the curve

In recent years the 1-month treasury bill has been quite sensitive to policy risks. While in the past the bill mostly responded to changes in the Fed's overnight target rate, in the current zero rate environment other events cause bill pricing to fluctuate. Changes in the 1m yield have not always corresponded to moves in longer term rates. For example, "taper" fears caused a spike in the 10-year rates while pushing the 1m bill down into the 0-2bp range. 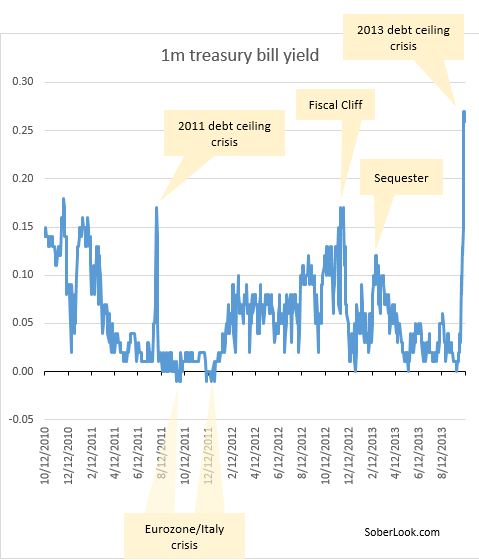 On the other hand, bank CD ("certificate of deposit" or "term deposit") rates just kept moving lower. Flush with deposits (see post), most banks have little use for additional short-term financing. As a result, the 1-m treasury bill now yields more than an average 1-month CD - which is a distortion that would normally never exist.


An even more bizarre market distortion is that the one-month LIBOR (which is somewhat tied to CD rates these days) is also lower that the corresponding treasury bills. The spread between the two has become negative for the first time in history. 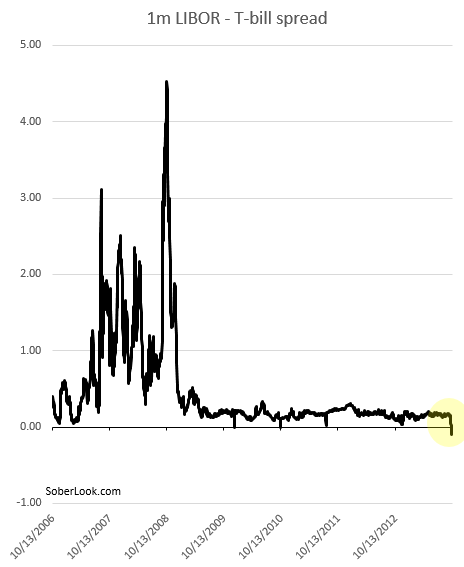 A naive interpretation of this effect would be that the US government credit is worse than bank credit. A better way to think about this however is that the one-month bill is priced to be longer than one month. Let's hope that all of this will be just a bad dream tomorrow, with the Senate apparently beginning to make some progress.