Reasons behind the sell-off in crude oil

WTI crude oil has undergone a substantial correction in the last few days. What's going on?


A few reasons for this price adjustment come to mind:

1. Iran seems to be getting ready to enter the market as it prepares for sanctions to be lifted.


Reuters: - Iran is reaching out to its old oil buyers and is ready to cut prices if Western sanctions against it are eased, promising a battle for market share in a world less hungry for oil than when sanctions were imposed.

New Iranian President Hassam Rouhani's "charm offensive" at the United Nations last month, coupled with a historic phone call with U.S. President Barak Obama, revived market hopes that Iranian barrels could return with a vengeance if the diplomatic mood music translates into a breakthrough in the stand-off over Tehran's disputed nuclear programme.

The Islamic republic's crude exports more than halved after the European Union and United States, which accuse Tehran of seeking nuclear weapons, tightened sanctions in mid-2012, cutting its budget revenues by at least $35 billion a year.

"The Iranians are calling around already saying let's talk ... You have to be careful, of course, but there is no law against talking," said a high-level oil trader, whose company is among many that stopped buying Iran's oil because of sanctions.


3. Related to the slower growth expectations for the US as well as to the recent government shutdown is the buildup of crude oil inventories. 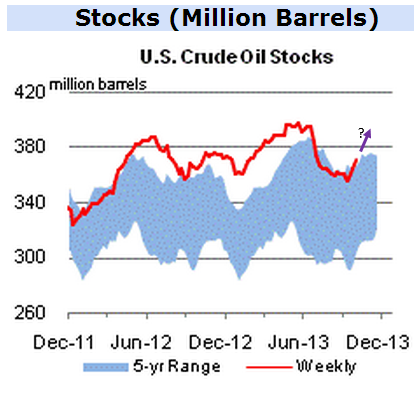 The supply report for the week ended Oct. 11 was released Monday after being delayed five days due to the government shutdown. It showed crude supplies up by 4 million barrels.

That expectation of 3 million barrels increase was too low. The actual number this morning was 5.2 million, as inventories continue to build.