The dark side of rising rental costs in the US

One factor that may continue to provide tailwinds to US housing recovery is the rental market. Rents are rising faster than inflation, widening the spread between housing costs and wages. 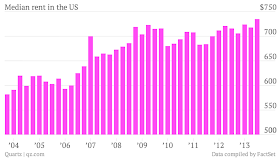 Bloomberg: - For households with children, rising housing costs, elevated unemployment and stagnant earnings are increasingly placing rent beyond reach. The housing slump made matters worse as former homeowners turned into renters, increasing competition for available apartments.
...
Nationally, the average hourly wage among renters is $14.32 this year compared with the $18.79 needed to afford an apartment at a fair-market rent, as defined by the U.S. Department of Housing and Urban Development, without spending more than 30 percent of income on housing, a National Low Income Housing Coalition report found in March. The $4.47 gap this year is wider than the $4.10 differential in 2012.
...
Median household income has fallen every year for the past five after adjusting for inflation, with Americans earning no more than they did in 1996, according to data from the Census Bureau. The share of people making less than $15,000 climbed to 13 percent of the population in 2012, from 10.9 percent in 2000, and the share making less than $35,000 expanded to 35.4 percent from 31.4 percent.

According to the Fed, the ratio of rental obligations to disposable income is now at post-recession high. Growing rental costs are driven by declining vacancies and lower housing inventory in the US. Of course the recent rise in interest rates has not helped matters either. Higher rates raise the break-even rent level for landlords who finance their properties.


While this development is encouraging some renters to plunge into homeownership, giving a boost to home prices, it is also displacing low income families. This trend is quite troubling.


Bloomberg: - The number of children without a home increased by an estimated 2 percent, according to NAEH, a Washington-based non-profit focused on policy and research on the needs of homeless people.
...
The share of Americans experiencing “deep poverty,” living at less than 50 percent of the $23,492 poverty line for a family of four, climbed to 6.6 percent in 2012 from 4.5 percent in 2000, based on Census Bureau data released last month.

That may increase the pipeline of Americans heading toward homelessness. There was a 9.4 percent increase in the number of poor people “doubled up,” or living with friends or family due to economic need, between 2010 and 2011, based on the NAEH 2013 report. Crowley said 2011 is the latest year for which usable data on doubling up is available.