The impact of a US technical default on long-term treasuries

We know how the short end of the US treasury curve is expected to react to a US technical default (see post). But what about the long end of the curve? A survey from JPMorgan suggests that investors are divided. 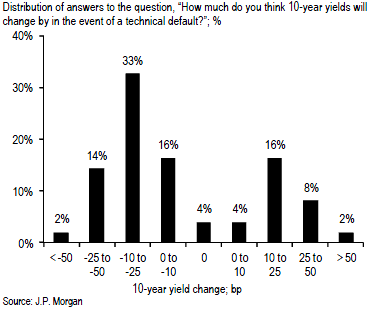 This of course would be an unprecedented event and nobody really knows how fixed income markets will react.

Those who argue that longer term rates will fall believe that the economy and the equity markets (as well as other risk assets) will take such a hit, a severe deflation will ensue. Under such a scenario treasuries will become similar to JGBs, with nominal yields collapsing even as real yields stay positive.

The other group however believes that such an event will shake investor confidence in treasuries so much - by delaying payments indefinitely - that investors, particularly foreigners, will dump the paper in unprecedented amounts. The dollar will take a tremendous hit and longer term rates would spike.

Neither scenario is particularly appealing.  Politicians who think this will help balance the budget will soon realize that the collapse of tax revenue from either of these outcomes will far outweigh any supposed improvements in fiscal discipline. Sadly, by the time the realization sinks in however, it will be too late.