The Gallop sentiment index is now at the lowest level since 2011, when doubts about Italy's ability to roll its debt posed risks to EMU's stability. It took the first 3-year LTRO program to bring some calm to the markets and to consumer sentiment. Now, in a matter of days we are back to those lows again. 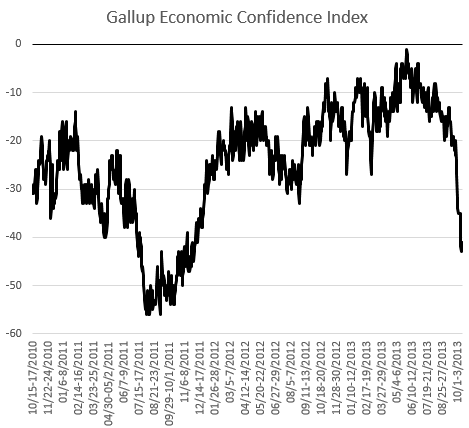 This is a serious blow to the US economy, with the full damage becoming visible in months to come. While there isn't much that can be done about the shutdown without some sort of a deal, academics have been desperately searching for a solution to what amounts to a constitutional crisis - the debt ceiling impasse. One such proposal came from Columbia University (Neil Buchanan and Michael Dorf).

The authors argue that the executive branch is presented with two competing directives. The Obama administration is required to spend money on programs appropriated by Congress (including paying on government debt, paying for Social Security, Medicare, etc.). At the same time the president is not allowed to issue incremental debt. Complying with both is an impossibility, forcing the president to violate the constitution one way or another. The two Columbia law professors argue that in such a situation the president should choose the "least unconstitutional" path. And that would be issuing additional debt without the approval from Congress (see paper below).

The problem with this solution is the market. Selling "unconstitutional" treasuries will encourage traders to short these bonds against older (constitutional) vintages. Inevitably someone will challenge the paper's constitutionality - potentially all the way to the Supreme Court. In the mean time yields on such paper may end up being quite high. Ultimately it will push up rates across the board as more of these bonds hit the market. Such a scenario could make the Fed's "taper" feel like child's play. The authors call these bonds "radioactive" and admit this solution could be problematic. Nevertheless they argue it is better than an outright default and could potentially pacify the markets.

It took the 3-year LTRO to calm global markets in 2011. Now we talking about "radioactive" bonds to help us do the same in 2013?