Relative to 2011, the public is still not paying sufficient attention to the looming US debt ceiling deadline. Many don't even believe the deadline itself is real, arguing that the recent government shutdown would magically balance the budget. Sadly, even some educated people still think that not raising the debt ceiling will somehow help get rid of Obamacare.


Electoral calculus remains the primary driver for decision making in Washington. Politicians are willing to take the nation to the brink as they attempt to score points with their highly polarized constituency. Sadly it will be the voters who will ultimately get hurt - many of them remaining blissfully ignorant about what's about to unfold.

Just to put things into perspective, equity investors seemed more concerned about the Fed slowing securities purchases than the possibility and the impact of the US government not being able to borrow.


Some have argued that the president can override the debt limit stalemate via the 14th amendment - one of the post-Civil War Reconstruction Amendments. That would certainly explain some of the apathy. But according to the White House, that is not an option.


The Guardian: - Some Democrats argue that powers granted under the 14th amendment to the constitution, which was introduced to control southern states after the civil war, would allow the president to unilaterally borrow money if there was such a threat to the credit-worthiness of the US.

"Using the 14th would show the Republicans he means business," one former aide to Bill Clinton told the Guardian last week.

But the White House ruled out the option on Thursday, ending days of Washington debate about whether this obscure legal authority might provide a way out for Obama – at least from one half of Republicans' fiscal pincer movement. "The administration does not believe the 14th amendment gives power to the president to ignore the debt ceiling," said spokesman Jay Carney.

Without this option and given the ongoing intransigence in Washington, there is a real possibility the debt ceiling clock will run out without a deal. Some investors are not taking any chances - particularly foreigners.  The US sovereign CDS spread is grinding higher.


Treasury bill investors are also increasingly concerned about not being able to get their money back on time (see post) - which is causing the one-month bill rate to rise as it did in 2011. 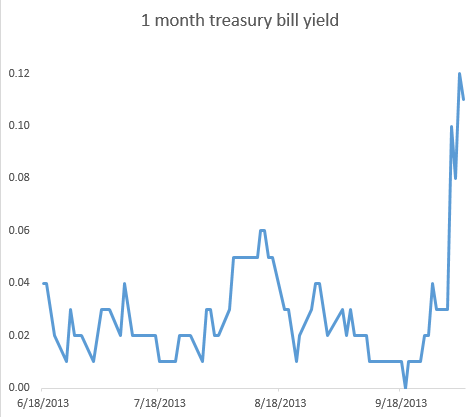 The short-end of the US treasury curve is now inverted as a result. 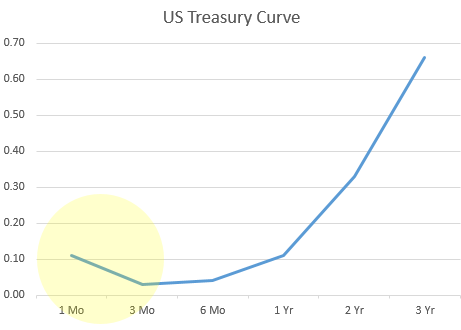 There is anecdotal evidence that a few investors are taking funds out of treasury money market accounts. Even though nobody is doubting that investors in such funds will ultimately get their money back, the concern is legitimate. A technical default by the US government may result in these funds becoming frozen for some period of time. There will simply be no liquidity to fund large redemption requests. What these investors fail to realize however is that in such a scenario, treasury money market funds will be the least of their problems.