It took a while for the public to begin to care about the debt ceiling fiasco, but the realization is sinking in that this is not just "fun and games".  Google search frequency for the term "government default" has moved way past the spike in 2011 to hit a new record.


Equity investors have pinned their hopes on a potential breakthrough in negotiations, with Paul Ryan suddenly stepping into a leadership role (see post). VIX dropped some 24% (relative move) in a couple of days in response and indices rose sharply.


Expectations have risen that the Republican leadership will attempt to find a face-saving solution that will reduce the ongoing bleeding of popular support for the GOP. The party is in trouble and is facing potential losses of seats in the House. What's even more concerning for some is the prospect of a Democrat in the White House for another 8 years. If anything, this should be enough of an impetus to find a speedy resolution.

Bond investors however are not taking any chances. The yield curve inversion has now moved beyond 1-month bills, with maturities out to three months are feeling the impact. Rumors persist that institutions are continuing to move out of treasury money market accounts in fear of having their funds frozen. 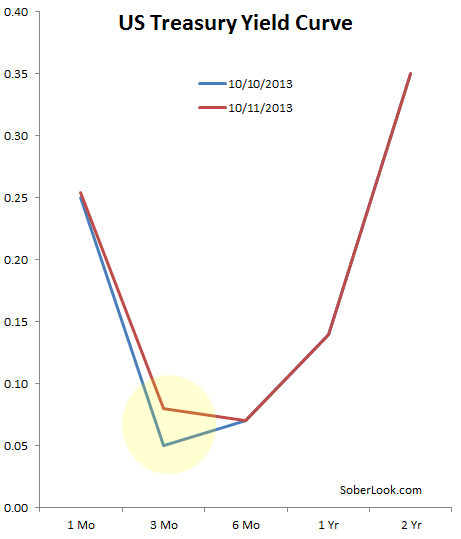 Today much of the action has moved to the Senate, with hopes that something positive could happen this weekend. The news so far is not encouraging.

After Senate Democratic leaders rejected a proposal Saturday by Sen. Susan Collins (R-Maine) to end the budget impasse, the burden to find a solution now falls squarely on Majority Leader Harry Reid and Minority Leader Mitch McConnell — two shrewd tacticians who have a long, complicated and contentious personal and political history with each other.

Republican senators, eager for a way out of a shutdown fight that has roiled their party’s brand, reacted to the leadership discussions positively, believing that the two crafty dealmakers could concoct a proposal to reopen the government and avert the nation’s first-ever default as soon as next week.

Reid, however, was notably more dour.

When asked if he is confident he could reach a deal with McConnell, Reid told POLITICO: “No.”