While there is a great deal of detailed discussion in the blogosphere about Japan's unsettling age demographics (see example), it's worth pointing out three key facts that add some urgency to the issue.

1. With zero immigration and falling birth rates, Japan's working-age population is declining sharply and is now at a level not seen in 30 years. The decline also seems to be accelerating. 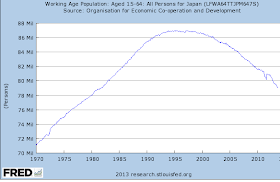 Wells Fargo: - While the overall population has only recently begun getting smaller, the labor force has been shrinking for more than a decade. This has serious implications for both the size of Japan’s future workforce and for domestic demand. According to the IMF, the size of the working-age population is projected to fall from its peak of 87 million in 1995 to about 55 million in 2050. If realized that would roughly equal the size of the Japanese workforce at the end of World War II.

2. As a result, the percentage of Japanese who are over the age of 65 has risen above 25% for the first time (and the growth in that ratio also seems to be accelerating.) A quarter of Japan's population is now over 65. That compares to about 14% of Americans who are over 65 (see stats).

Just to put this in perspective, the total sales of adult diapers in Japan is about to exceed that of baby diapers (see story). Also see this amazing story about "a program to promote the use of nursing care robots to meet expected increases in demand in the face of Japan’s rapidly aging population."

3. According to Wells Fargo this is creating some material distortions in Japan's domestic interest rates. In fact (and this is an amazing fact indeed), Japanese seniors are having a greater impact on bringing down JGB yields than BOJ's unprecedented QE effort (see post).


Wells Fargo: - In addition to reducing potential growth, the aging of the population in Japan is having a downward influence on interest rates [chart below]. According to the IMF, elderly households prefer to avoid risk and feel more comfortable with safe assets such as Japanese Government Bonds; so much so that the downward effect on rates from elderly purchases has a bigger impact than purchases by the Bank of Japan.